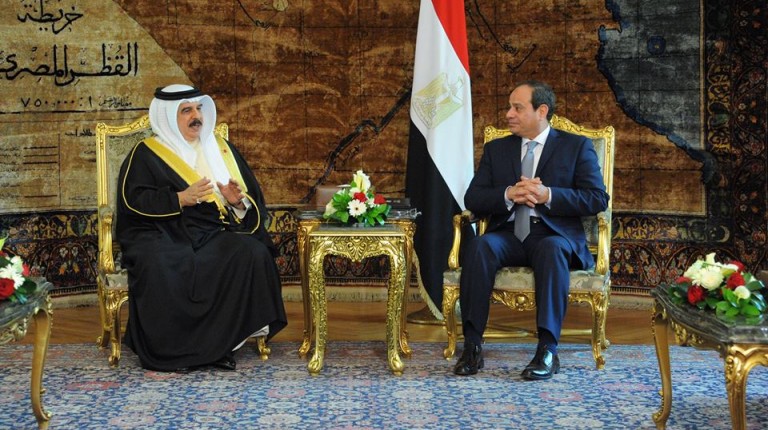 President Abdel Fattah Al-Sisi is set to continue hisGulf tour on Sunday, heading to Kuwait for a two-day visit, and then moving on to Bahrain, according to a presidency statement released on Saturday.

The president’s tour began weeks ago when he arrived to Saudi Arabia, heading to the United Arab ofEmirates (UAE)a few days later to discuss further cooperation and hold talks on bilateral and regional issues.

In Kuwait, Al-Sisi is scheduled to meet the Emir of the State of Kuwait,Jaber al-Ahmad al-Sabah, to strengthen bilateral relations between the two countries, as well as to continue consultation and coordination on various regional and international issues of mutual interest.

The presidency statement noted that both sides are keen on continuing joint coordination to deal with the challenges the Arab world faces and that they want to promote and protect Arab national security.

Regarding Al-Sisi’s visit to Bahrain, he is scheduled to hold bilateral talks with King Hamad bin Isa Al Khalifa as well.

The visit also aims at continuous consultations between the two countries on the development of their bilateral relations at all levels. Both leaders are scheduled to discuss ways to strengthen the unity of Arab countries and enhancing their ability to protect their common interests, as well as ways to stand against all attempts of foreign intervention.

Both visits aim to follow up on bilateral partnerships, reviewing updates on regional conditions, and to confirm the strength of bilateral relations.

Egypt has multiple cooperation agreements with foreign countries. Among these cooperations were military drills with the UAE and Bahrain in counterterrorism and practicing hostage situations by exchanging skills and expertise on the level of the special forces, naval units, and the air force. Egyptian and Bahraini forces have previously engaged in intensive joint military exercises in the Arabian Gulf.

As for Kuwait and Saudi Arabia, both countries have signed deals with Egypt to provide the country with petroleum products. The UAE has offered great support to Egypt’s economy, while also backing it politically, as both sides work together in addressing Libyan crisis.

Over the past four years, Gulf Countries have been actively supporting the Egyptian economy through financial grants and investments, especially in the oil sector.