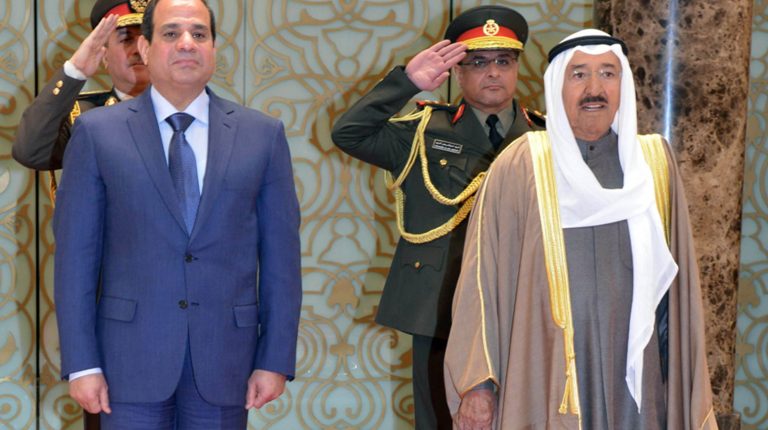 President Abdel Fattah Al-Sisi held talks with the Emir of the State of Kuwait, Jaber al-Ahmad al-Sabah, following his arrival to Kuwait on Sunday.

Upon his arrival, Al-Sisi was greeted by the Kuwaiti Emir in an official reception ceremony. Egyptian senior officials accompanied Al-Sisi in his visit to Kuwait, which will last two days.

Talks between both leaders confirmed brotherly relations between the two countries and tackled ways of enhancing it. The discussion between Al-Sisi and the Kuwaiti Emir focused on bilateral relations with the aim of expanding the horizon of cooperation between their countries to serve common interests.

The meeting also included discussions on the means of supporting unity in the region and ways of forming a joint-Arab action process, as well as the consultation and coordination on various regional and international issues of common concern

During the meeting, Al-Sisi expressed appreciation for Kuwait’s support to Egypt. He further stressed the importance of security and stability at the Gulf, stating that the security of the Gulf is part of Egypt’s national security.  He added that Egypt is standing beside in Kuwait in confronting regional and external threats.

On the other hand, Al-Jaber Al-Sabah stressed the importance of Egypt and its people for the Kuwaiti people and their government, especially since Egypt has for decades contributed to addressing the challenges and threats the Arab world is facing. He praised Egypt’s pivotal role, considering it a major pillar of the security and stability of the Gulf states, as well as of the entire Arab world.

The two sides stressed the need to prepare well for the next meeting of the Egyptian-Kuwaiti Joint Committee to ensure the continuation of bilateral cooperation in various sectors, such as politics and economics.

Al-Sisi is scheduled to hold additional meetings with other Kuwaiti officials.

Following his visit to Kuwait, Al-Sisi is scheduled to head to Bahrain for bilateral talks with King Hamad bin Isa Al-Khalifa. The visit also aims to facilitate continuous consultations between the two countries on the development of their bilateral relations and regional issues.

Over the past four years, Gulf countries have been actively supporting the Egyptian economy through financial grants and investments, especially in the oil sector.