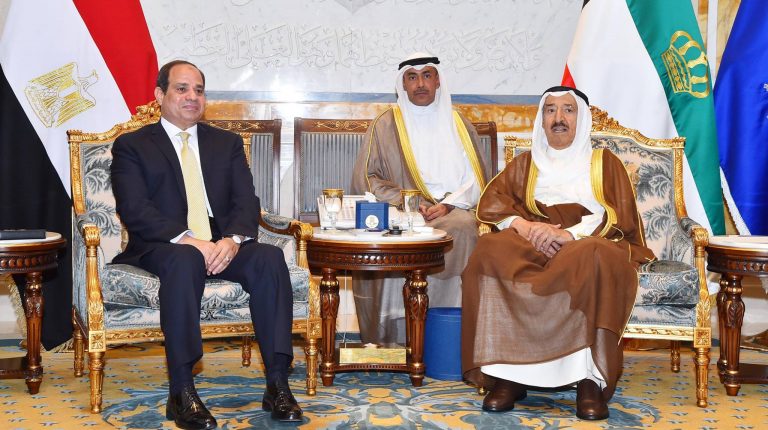 President Abdel Fattah Al-Sisi arrived on Monday to the Bahraini capital as part of his two-day tour of Gulf countries and was welcomed by King Hamd Bin Eissa Al-Khalifa of Bahrain, where they discussed fostering bilateral relations between the two countries and security in the region.

During the talks between the two sides, Al-Sisi asserted the need of Arab cooperation to counter the intervention of foreign forces in the affairs of Arab countries.

Before heading to Bahrain, Al-Sisi had visited Kuwait on Sunday and met with the Emir of Kuwait, Sheikh Al-Sabah Al-Jaber.

The talks with the Emir included means of fostering bilateral relations, among other regional issues where both parties agreed on the importance of enhancing the efforts to combat terrorism, according to a statement by the official presidential spokesperson, Alaa Youssef.

Youssef said that the Emir of Kuwait described Egypt as the cornerstone of security and stability in the region, further praising Egyptian nationals in Kuwait, adding that his country is committed to enhancing bilateral relations with Egypt.

The Emir and Al-Sisi both stressed the importance of the upcoming Egyptian-Kuwaiti Joint Committee and the preparation for it in order to develop frameworks of cooperation between the two countries.

Al-Sisi asserted that Egypt would stand by Gulf countries against any regional or foreign threats, and further invited Sheikh Al-Jaber to visit Egypt.

During the talks, prime minister Sheikh Jaber Al-Sabah praised the economic reform policies Egypt is following, adding that his country is committed to cooperate with Egypt in all fields.

The Kuwaiti minister of foreign affairs stressed that the bilateral support is important in international organisations, such as the United Nations (UN), pointing out the Kuwait is set to follow Egypt by becoming the “Arabs’ representative” as a non-permanent Security Council member, hence both countries need to coordinate beforehand.

The two visits come as an end to Al-Sisi’s recent tour to discuss bilateral relations with Gulf leaders, as he earlier visited the Kingdom of Saudi Arabia and the United Arab Emirates (UAE).

Gulf countries have been a supporting force to the Egyptian state, both financially and politically.

Threat of terrorism and necessity of changing political and legal convictions