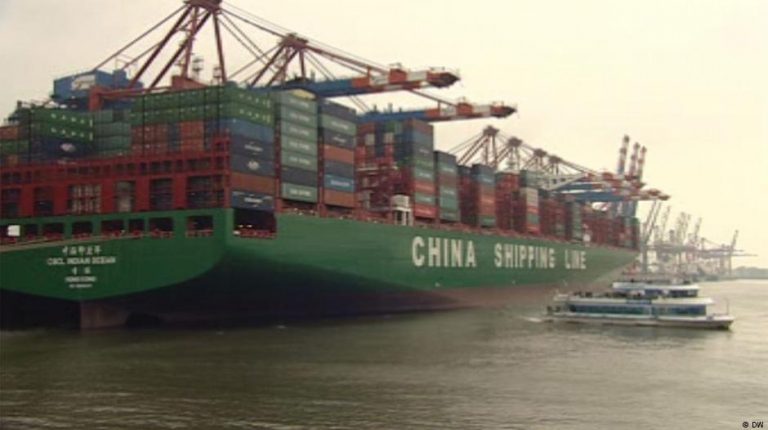 Chinese exports rose for the second consecutive month in April, but at a slower pace than in the previous month. Import growth was also smaller than expected as China’s financial deleveraging begins to take its toll.China’s export growth almost halved last month in US dollar terms, growing eight percent year-on-year to $180 billion (163.8 billion euros), but markedly down from a 16.4-percent rise in the previous month and short of expectations of 10.4 percent.

April’s numbers left the country with a trade surplus of $38 billion, which compared with forecasts for $35.50 billion, and above $23.93 billion in March. The April trade figures are preliminary, with revised data due on May 23.

Reasons for the growth slowdown were weaker inbound shipments of commodities such as iron ore and copper weakened, while exports failed to keep momentum due to a general cooling in demand for electronic gadgets.

China’s export data had improved in March as fears of a trade war with the United States eased after President Donald Trump’s stance on Beijing softened after a cordial summit with President Xi Jinping. Trump reversed course on an election campaign promise to label Beijing a currency manipulator and slap punitive tariffs on Chinese imports.

Moreover, an overall improvement in global growth means shipments from the world’s second largest economy will likely stay strong this year. According to an estimate by the Chinese Ministry of Commerce released last week, imports and exports are expected to stabilize and improve in the near future.

Exports to the huge US market increased by 11.7 percent in April compared to 19.7 percent a month earlier, while shipments to the European Union rose four percent. The figures follow official and private surveys showing that factory activity expanded at a slower-than-expected pace in April, mildly concerning economists.

An analysis by Nomura noted: “Today’s trade data suggest that growth momentum weakened slightly in April,” adding that the Japanese investment bank expected China to grow 6.8 percent year-on-year in the second quarter, compared to 6.9 percent in the first three months of 2017.

And Xia Le, a Hong Kong-based economist at Banco Bilbao Vizcaya Argentaria SA, told Bloomberg News that imports would reflect the trend of “China’s financial deleveraging” starting to weigh on the domestic economy.

China’s central bank has cautiously shifted to a tightening policy bias in recent months after years of ultra-loose monetary policy led to an explosive build-up of debt, forcing the authorities to take steps to defuse bubbles.

The tightening has spilled into corporate China, which is facing a credit crunch over the coming months. A shrinking domestic bond market and pressure on banks to clean up are leaving firms grappling to refinance $130 billion of debt that comes due this year, and $248 billion more in 2018.

Investors are concerned that increased regulatory efforts to ward off systemic risks could hurt economic growth. “The economy is turning a bit more than people anticipated,” said Julian Evans-Pritchard, an economist at Capital Economics in Singapore, adding that growth data could surprise on the downside, similar to recent PMI surveys.