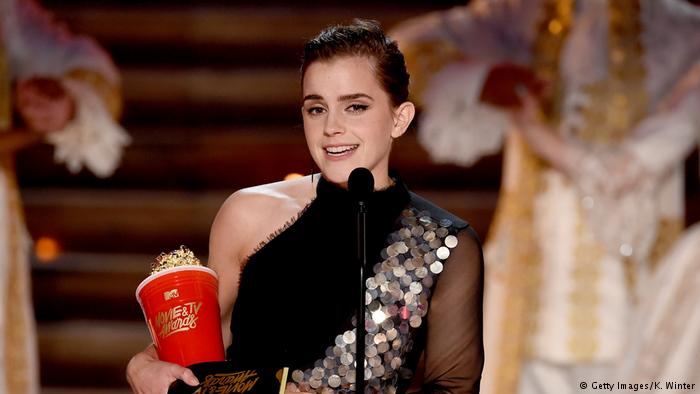 “Beauty and the Beast” and “Stranger Things” were the big winners at the 26th MTV Movie & TV Awards in Los Angeles, which are chosen by viewers. Also honored were stars Emma Watson and Millie Bobby Brown.The gender-neutral trophy for best actor in a movie at the 26th MTV Movie and TV Awards went to 27-year old actress Emma Watson for her performance in the new live-action version of “Beauty and the Beast.” It was the first time that actors and actresses – including Hugh Jackman in “Logan” – were competing together in the same category.

“Acting is about the ability to put yourself in someone else’s shoes, and that doesn’t need to be separated into two different categories,” Watson said when receiving her trophy.

A favorite from the outset with six nominations, thriller “Get Out” claimed the “next generation” award for the performance of Daniel Kaluuya in the main role, as well as for Milton “Lil Rel” Howery for “best comedic performance.”

Television honored for the first time

For the first time, TV films and series were also honored during the gala on Sunday night, with the Netflix series “Stranger Things” winning against its main competitors “Game of Thrones” and “Atlanta.”

In addition, the award for best actor in a TV series went to 13-year old British actress Millie Bobby Brown, who played the main role in the retro mystery series.

The film “Hidden Figures,” which tells the story of three female African-American NASA mathematicians, was the winner in the category “best fight against the system.”