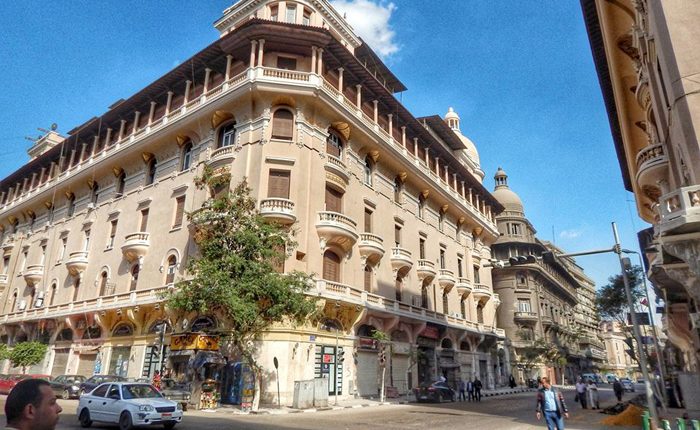 There’s no doubt that the glory of Cairo’s downtown buildings makes the area one of the most mesmerising spots in Egypt. Despite being worn by time, the buildings, which were built in the Khedive Ismail era, were and still are a signifying proof of how architecture resembles a city’s beauty, elegance, and modesty. Celebrating the 150th anniversary of establishing Khedive Cairo, the National Committee for the Protection and Renovation of Cairo’s Heritage decided to start the second phase of restoring downtown buildings.

The committee, under the direct supervision of Prime Minister Sherif Ismail, started the second phase by renovating the “Khedive building”, one of the main structures near Tahrir Square. The building is one of the first constructed buildings of 19th century Khedival Cairo. For over 100 years, it has had a reputation of one of the most visitable streets downtown.

In cooperation with the Body of Cultural Reservation, the committee put forward the plan of renovating the building while maintaining its unique cultural architecture, which resembles the era’s civilisation. The committee is to list other heritage buildings that are of high cultural importance for Egypt’s recent history.

“We decided to start with the Khedive building due to the very important role it plays in Cairo’s heritage,” said Reham Azzam, the committee’s person responsible for downtown’s building renovation, adding that “the building is quite challenging due to the problems it has in its structure, as well as the design.”

Azzam believes that the building is unique in its architecture,which was designed in the French style of that time, and renovating it will set the example of the hard work the committee pays to renew the prestigious, precious buildings of downtown.

Khedive Cairo was established starting in 1867 under the rule of Khedive Ismail, with the help of French architect Housman. The architectural jump during that era caused Cairo to be dubbed the “Middle Eastern Paris.”