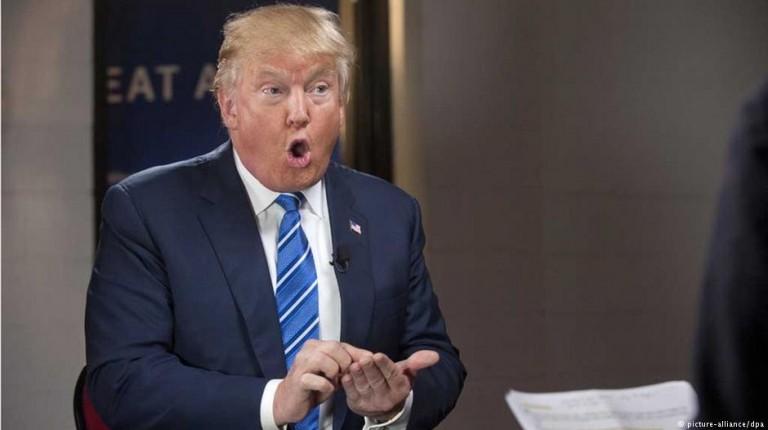 Donald Trump is mulling whether to pull the US out of the Paris Climate Agreement. As negotiators gather in Bonn to discuss putting the plan into action, the WRI’s Paula Caballero tells DW what a US exit could mean.DW: You’re in Bonn for preparatory climate talks – the first round of negotiations attended by representatives from the new US administration under United States President Donald Trump. There’s talk of the US pulling out of the Paris Agreement. How do you assess the situation?

Paula Caballero: Everybody is monitoring the situation with great concern, but we all feel that it would be an error for the US to pull out of the Paris Agreement. It will erode its international standing – not just in the international climate diplomacy arena, but also on trade and other issues.

The agreement is a way of encouraging a transition to clean, low-carbon economies. That means jobs. That means continued economic growth. That means incentives for innovation – everything that will help to deliver growth for the US and for other countries.

But so far that message doesn’t seem to have reached President Trump. What has to happen to change that?

I think the message is reaching President Trump, because a decision has not yet been made, so clearly there are different forces within the administration that have very different perspectives.

He’s a businessman. And there’s a strong business case for staying in Paris.

What impact would it have on the Paris process if the US did withdraw?

If the United States withdraws, obviously it will have an impact on the negotiations – there’s no question – but it wouldn’t be the end of the negotiations. The US elections happened right at the beginning of COP22 in Marrakesh last November. And yet, countries continued on signing up to ratify the Paris Agreement. We also saw the Climate Vulnerable Forum, a group almost 50 of the most vulnerable nations in the world, saying that they’re going to go 100 percent renewable. So there’s incredible will within the negotiations to move this forward.

Yes, if the US pulls out it will create a problem – but we should not equate that with a derailment of the process.

But a country like Australia, for instance, has said it would have to review its commitment to the Paris deal if the US pulls out. Could there be a knock-on effect with other countries?

The countries that are not fully 100 percent committed to Paris might indeed take a signal from the US. But this is not in their interests, and it is certainly not in their constituencies’ interests. There is strong public opinion in Australia against decisions related to coal and against decisions that are going to undo the work that’s been done in Australia to help it meet its commitments. There’s also a lot of global concern about ecosystems like the Great Barrier Reef. So Australia, like the US, needs to understand that these are not decisions that are taken in isolation, and do not have repercussions on the global stage.

I always want to ask President Trump and others: is this really what you want your legacy to be? Because regardless of anything else you do, down the march of time, what you will be remembered for was when there was that golden moment to really do something about climate change, and you said no.

But given that the US is one of the world’s biggest emitters of greenhouse gases, isn’t it dangerous to downplay this Trump effect?

I’m not in any way seeking to downplay the Trump effect. But I’m saying that the Trump effect is not a terminal effect. It would be felt and would have negative impacts, but it would also have positive benefits, because more countries and more constituencies I think will be galvanized into action. The process will go forward.

And in a way, it might go forward even more strongly because what we’re seeing here is really a distributed network of leadership. We’re seeing strong statements from President Xi Jinping of China, strong commitments from India, very strong signals from countries around the world saying that they’re going to deliver on climate change, because it makes sense for them to keep their development trajectories, their economic growth on track.

If the US stays in the agreement, is it possible this could weaken it?

Obviously, if the US doesn’t have a constructive spirit, this will have an impact on the negotiations. But there have been other countries in the past that have been difficult, and I would say that the end result has been that we’ve come out with a strengthened position.

So which countries do you think will be showing leadership? Do we look to China? And how do you see the position of the European Union?

There is distributed leadership today – not just in words, but leadership in actions. China is investing $361 billion (329 billion euros) in the coming years in renewables, and that’s going to be generating about 5,000 jobs a day. That’s significant. India is looking to quadruple its renewable energy. We’re seeing very strong and decisive action from the groups of highly vulnerable countries, and I expect a lot of continued leadership from the countries that make up the high ambition coalition. Europe has signed on, and is a very clear example of the fact that you can grow very decisively by downscaling your emissions. So [the EU] is a group of countries that we will look to for leadership.

We’re still very far away from reaching the target to limit warming at 2 degrees above pre-industrial levels. How do you see our position now and what has to happen for us to make it in time?

If not, it doesn’t mean that we won’t be able to reach it. We still can. But each time it becomes progressively harder and progressively more expensive. So it’s in everybody’s interest – and that’s the important part.

But we need very great political leadership. We need extraordinary innovation and decisiveness on the part of the private sector, and we need for civil society – for scientists, for students, for mothers, for fathers, for everybody – to demand action from their governments. Why aren’t we stepping up more to ensure that that message of urgent action is something that reverberates in homes across countries, in public sector offices and in board meetings? Urgency is the name of the game right now.

Read more: Bill McKibben on why Trump should fear a people’s awakening

Paula Caballero is the Global Director of the Climate Program at the World Resources Institute. She was a lead negotiator for Colombia for the United Nations Framework Convention on Climate Change, and was awarded a Zayed International Prize for the Environment in 2014 for her contribution to “environmental action leading to positive change.”

This interview was conducted by Irene Quaile, and has been edited for clarity and length.