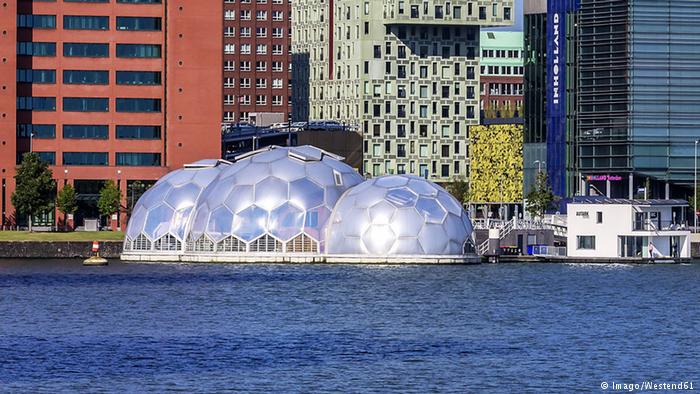 The Dutch are attempting to “climate-proof” their port city of Rotterdam by changing its relationship with water. Other delta cities around the world will also need to innovate if they are to survive sea level rise.For centuries, the Dutch have fought against the sea – and won. True to its name, the Netherlands is located in an extremely flat and low-lying region, with about a quarter of the country below sea level, and about half just 1 meter above.

But as the realities of global warming and predicted sea level rise become more apparent around the world, the Netherlands has earned itself a reputation as a leader in adapting to climate change.

The port city of Rotterdam in particular has garnered international attention recently with its ambitious adaptation strategy, which aims to climate-proof the region by 2025.

Rotterdam is already famous for its mammoth Maeslant storm surge barrier – the largest of its kind in the world. Built in the 1990s, it has the capacity to protect the city from a 10,000-year storm.

Now the city is turning from fighting the water to working with it. Among urban developments planned: A floating neighborhood, already in the works; and a floating dairy farm, expected to be completed by the end of 2017.

The Netherlands isn’t the only country having to come up with solutions to rising sea levels and storm surges.

Many delta cities around the world are already seriously planning ahead and developing their own “action plans” for the worst-case scenario.

Maarten van Schie, a researcher for spatial analysis and modeling with the Netherlands Environmental Assessment Agency, told DW that the Netherlands is working to export its knowledge to other regions facing similar risks associated with climate change, so they can put their own adaptation strategies in place.

“Cities are becoming increasingly prominent on the international agenda, and more people will live in cities,” he said. The Netherlands has special expertise when it comes to water problems in deltas, he pointed out.

Van Schie pointed to a major disaster in the 1950s, when a large portion of the Netherlands flooded. “We said, ‘we’re never gonna do that again’ … so we made a very strong run to develop the kind of knowledge needed to deal with living in these kinds of risk-prone Netherlands areas.” He said exporting Dutch expertise in this field has definitely been successful.

And the Dutch are not the only ones offering solutions on urban innovation responding to sea level rise. International collaboration between cities facing similar climate change-related risks is becoming increasingly common – notably, the partnership between Copenhagen and New York, where resilience against rising sea levels and cloudbursts is shared at an official level.

However, not all coastal cities have the resources to adapt to the effects of climate change – nor can they all afford to a build a Maeslant-scale infrastructure project to hold back the rising sea.

In many Western delta cities, climate change adaptation tends to work from the top down. In other regions – particularly in developing countries – it is common for politics, bureaucracy or corruption to get in the way of action.

One solution to this problem is the Educational Partnerships for Innovation in Communities Network (Epic-N), an initiative based in the United States that works to connect university students with cities and communities in need of adaptation solutions.

Sean O’Donoghue is manager of the climate protection branch in the environment department in Durban, South Africa. He has partnered with Epic-N in order to tackle climate change in the eThekwini Municipality.

Durban has low levels of development, historical inequality, high levels of poverty, and high levels of vulnerability where people have moved into informal settlements, he explained. “You’ve got to overlay all these existing problems with what climate change is going to bring.”

Durban has benefited from a community-based educational approach, which has worked to inform government officials about the realities of future threats such as sea level rise.

“We want to develop an academic basis for an African development of the landscape, which we hope can be used elsewhere,” said O’Donoghue.

“We use [climate change] as a ticket to improve the lives of our communities.”