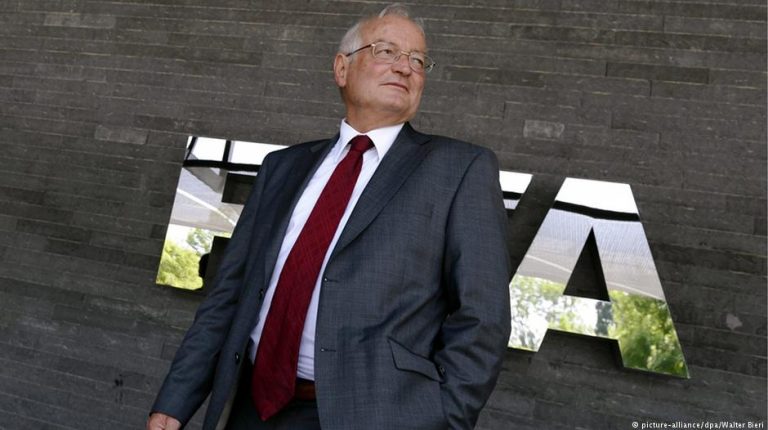 FIFA has ousted judge Hans-Joachim Eckert and prosecutor Cornel Borbely. The pair say the decision taken on Tuesday by Gianni Infantino’s organization ‘puts an end to reform efforts.’Eckert (pictured, top), from Germany, and Berbely, from Switzerland, failed to be nominated for re-election to the council headed by Infantino. The vote will be carried out by the congress of member federations on Thursday in Bahrain.

The departing pair have multiple ongoing cases against soccer officials implicated in a widespread U.S. federal investigation of bribery and corruption.

“The impending and clearly politically motivated non-reappointment puts a de facto end to the reform efforts,” Eckert and Borbely said in a statement. “This will inevitably lead to a renewed loss of trust and further hurt the already tarnished image of FIFA.

“Consequently, the non-reappointment will have a negative impact on FIFA in the medium and long term.”

Eckert and Berbely were heavily involved in the cases that brought down Infantino’s predecessor Sepp Blatter and UEFA boss Michel Platini. Vassilios Skouris of Greece, a former president of the European Court of Justice has been nominated to replace Eckert while Borbely is to be replaced by Colombia’s Maria Claudia Rojas.

A statement from FIFA said that candidates “will be presented for election en bloc to the FIFA Congress, each for a term of office of four years which would come into effect immediately.”

Pogba move to be investigated

FIFA also announced on Tuesday that Paul Pogba’s transfer to Manchester United from Champions League finalists Juventus is to be investigated.

The organization says it has asked for details from the Premier League club about the 105 million euro (then $116 million) deal.

FIFA says it has “requested information from Manchester United on the transfer.” That would be information beyond the details retained by FIFA’s Transfer Matching System, which has to ratify player moves between nations.

United responded on Tuesday evening with a statement saying: “We don’t comment on contracts. FIFA have had all the documents since the transfer was completed last August.”