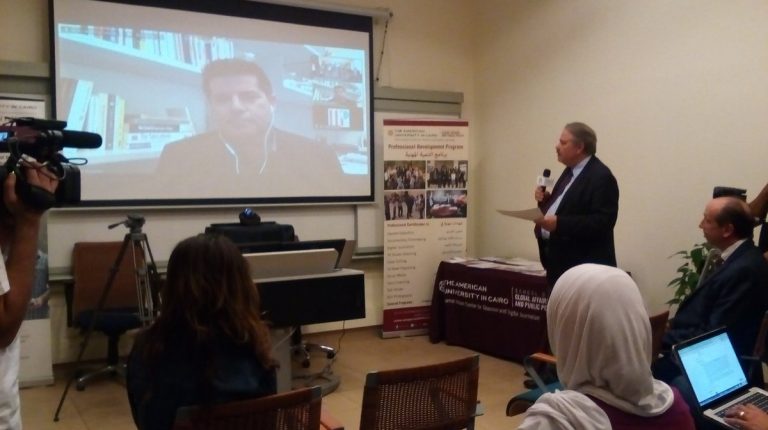 The AUC kicked off the first-ever virtual session series at the Adham Center for Television and Digital Journalism, a conference call with professor Vince Gonzales, who is an investigative journalist, professor of professional practice at the University of South California, and coordinator of the University’s Annenberg School for Communication and Journalism’s masters degree programme in journalism. He spoke to students about credible news-making on social media. It was a great discussion titled “Critical News-Making for Social Media.” The session was moderated by professor Dr. Hussein Amin, director of the Kamal Adham Center for Television and Digital Journalism, and in the presence of guest of honour Mr. Brian A. Shott, press attaché at the US embassy.

The interactive session discussed how to maintain credibility, standards, and traditions that make media organisations look great and how traditional media organizations, such as the New York Times and CNN, had to change in the presentation of themselves and in their tone of journalism.

In understanding how to reach audiences, Professor Gonzales focused on how to maintain them and how to get them to deeper content, how to thread each piece of journalism through a complex maze of different sites and applications, which fundamentally changed the way newsrooms operate.

He also explained that the essential nature of journalism has not changed and that it is still about reporting stories, about being balanced, and adding perspective and context to help explain the world. But now it is threaded through a system built for scale, speed, and revenue.

Furthermore, highlighting the integration between the news business and social platforms, such as Facebook, Twitter, Snapchat, and Google and how those are significantly influencing the direction and practices of journalism.

He also discussed researches that proved that people like to spend more time with longer articles on their cellphones rather than with shorter ones as they need context, perspective, and sources they can trust.

Professor Gonzales emphasised and explained the central role of audience strategists and social platform editors at the United States. On the other hand, the strategy which should be followed by reporters in using social media is to understand the most common traps and knowing what to report to people through giving them the information they need—for example, not to tell them how to vote and for whom but telling them to go to the voting booth and be a responsible citizen.

In his presentation, he also discussed targeting potential audiences and how to drive them to your broadcast, main site, or premier platform, as well as the importance of verification of what you see and read online as a fundamental step during the process of reporting, knowing when a short video can replace graphs and texts, and taking advantage of the thirst for news in breaking situations to reach new audiences.

An open discussion between Professor Vince Gonzales and AUC scholars covered several issues regarding media illiteracy in Egypt and the United States.

He explained the wide-spread belief regarding a strong political bias in the media with various notable newspapers having made endorsements of candidates in the 2016 US presidential elections and to some extent had a significant effect on shaping the voters’ views. There are organisations which now have political point of view, but 10 to 20 years ago these organisations were objective and not part of the political process. Nowadays, there is a shift in perceptions, political stances, and ways people operate in the media.

Regarding the emergency law and the publishing of negative news, he said that the press’ watchdog role in monitoring the conduct of government officials is assumed to be vital for democracy. The effectiveness of this watchdog role is less clearly understood. The exact role of journalists is to examine the actions of the government and whether the government attacks them. The role of a journalist in case of emergency is not about attacking the government, but about preventing any violations or malpractices.

On a question about how to balance and promote your story, or in other words your brand, professor Gonzales asserted that they teach their students in the public diplomacy and public relations community how to present the information in a way that make their audience do not feel that they are pushing a certain message on them, but presenting it in the form of a good story.

Professor Gonzales replied to a question about the most creative way to cover the visit of President Abdel Fattah Al-Sisi to Washington, that organisations such as CNN would not like it to be a non-traditional coverage; however, if you are just covering what everybody else is covering, that is not news. For example, Jimmy Breslin, one of the most famous columnists, wrote his most famous story by literally stepping away from what his peers were covering. For example, when the media was focusing on president John F. Kennedy’s funeral, Breslin followed Clifton Pollard, the man who dug the assassinated leader’s grave at Arlington National Cemetery, and came out with a better story than anyone else who was just covering the news. He explained that as a journalist, you have to cover the story from a different perspective and find voices which other reporters are ignoring and what deeper reporting you can do to present a very different view to the public.

Another question was raised by professor Dr. Hussein Amin on the use of visualisation in news reporting. Professor Gonzales explained that it is an important tool used in the US in which journalists are able to create their own interactive graphics and add visual components to their reports in order to engage users, to turn paragraphs into an interactive timeline with videos and photos. Some others use sound sites to augment their texts, by adding an audio for users to hear a longer version of the story.

I encourage you to watch the video of this informative presentation and discussion about the credibility of different social media platforms and latest trends in journalism and news reporting.