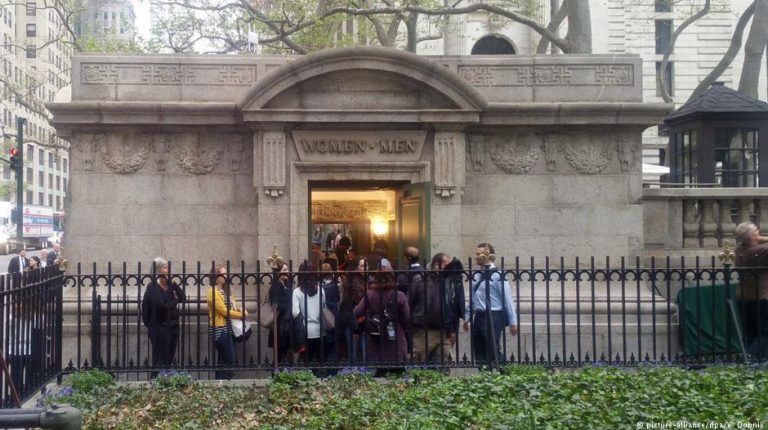 Classical music, framed watercolors and vases overflowing with fresh flowers – welcome to New York’s poshest public toilets refitted with a $254,000 upgrade, where tips are banned and the facilities are free.Gutted and re-decorated before re-opening in late April, more than a million people a year are expected to frequent the spotless Beaux Arts premises in Bryant Park behind the Public Library on Fifth Avenue.

Porcelain tiles were imported from Europe. Plastic toilet seat covers rotate at the wave of a hand, air conditioning circulates the air and piped orchestral music almost drowns out the sound of the automatic flush.

The polar opposite of the filth of most public restrooms, they cost $271,000 a year to operate and pay attendants to keep pristine two-to-a shift – bankrolled by the Bryant Park Corporation, a privately financed public park.

“Absolutely gorgeous!” breathes Pam Brown, a retired accountant from San Francisco on holiday in the city for five days. “This should be all over the world,” agrees Danish friend Lone Aggersbjerg, 52. “Drink water and have to go to the toilet, it’s just that. A need everybody has.”

A stone vase of flowers stands at the entrance before a giant mirror as if in a stately home – blooms changed twice a week by a florist. In the ladies, there’s a baby changing station, complimentary feminine products “upon request” and a full-length mirror to smooth out any ruffled hems.

The rules are simple – no tipping, a mainstay elsewhere in New York – no smoking, spitting, teeth brushing, doing the laundry or jumping the queue. Original watercolors grace the wall – courtesy of a “painter in residence” program that commissions artists to imagine the park “en plein air.” “People don’t want to leave,” confides attendant Antionette Smalls, who will clock seven years on the job this December. “Some people tell me this bathroom is cleaner than their bathroom at home.”

But New York always has nitpickers: “It’s very small,” says Johana Cruz, 35, who lives in Brooklyn and works for a cake company. Brett Horner, a park planning manager from Oregon, splits hairs over the color palate and art work. “I’d like something more modern,” he quips.