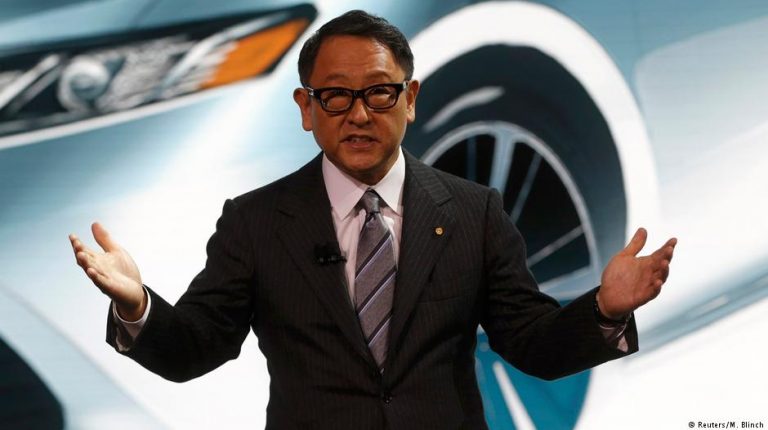 The world’s second largest carmaker reported its first drop in annual net profit in five years, warning that the decline could be followed by another profit slump this year due to higher costs and a further rising yen.Toyota posted a net profit of 1.83 trillion yen ($16 billion, 14.7 billion euros) in its last fiscal year ending March 2017 – down more than 20 percent from a record 2.31 trillion yen in the previous year. Revenue of 27.6 trillion yen was also slightly lower.

The Japanese auto giant, which lost its crown as the world’s top-selling carmaker to Germany’s Volkswagen (VW) in 2016, said Wednesday that sharp gains in the yen at the start of its fiscal year were partly to blame for the slowdown. At the time, Britain’s vote to leave the EU and tumbling world equity markets triggered an investors’ flight into financial safe havens such as the Japanese currency, causing the yen to rise.

Vehicle sales in the past fiscal year ticked up to 10.25 million units from 10.09 million a year earlier. Unit sales in the key North American market remained flat, while Toyota registered a pick-up in Europe, Japan and the rest of Asia. Demand dropped in Central and South America, Africa and the Middle East, it said.

On Wednesday, Toyota warned it expected more currency pain this business year, with net profit projected to fall another 15 percent to 1.5 trillion yen in the period to March 2018 – way off market expectations of around 1.9 trillion yen. Revenue is also forecast to come in lower, at 27.5 trillion yen with annual vehicle sales expected to remain flat at 10.25 million units.

Satoru Takada, a Tokyo-based analyst at research firm TIW, said that Japan’s auto sector would continue to be hit by a fluctuating foreign exchange market. “There is also a concern that demand in the cash cow North American market may have peaked as competition there intensified,” he added in a note to investors.

Toyota, as well as its Japanese rivals Nissan and Honda, is also facing uncertainty over the trade policy of the new US administration aimed at supporting US carmakers over foreign imports, and raising fears of global trade war. US President Donald Trump has targeted Toyota with strong criticism of its ongoing project to build a new factory in Mexico, threatening it with painful tariffs.

As a result, Toyota said in January it would invest more than $10 billion in the US over the next five years, including $1.33 billion at its Kentucky plant, creating thousands of new jobs.

Toyota’s conservative guidance also comes as the carmaker grapples with rising research costs to develop self-driving technology as well as fuel-cell vehicles and electric cars. The group is also upgrading its plants worldwide as it plans to roll out new models over the next few years with revamped vehicle platforms and components.