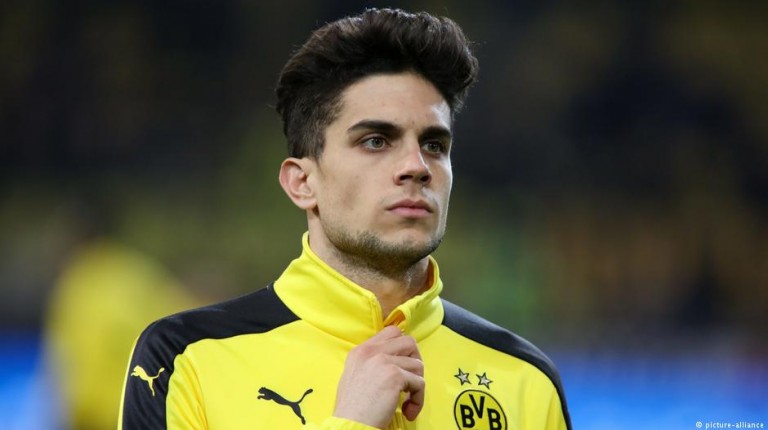 Marc Bartra has returned to the pitch wearing a blue cast on his right arm. The Borussia Dortmund defender was injured in a bomb attack on his team bus in April that was allegedly motivated by greed.Borussia Dortmund defender Marc Bartra returned to training on Wednesday almost a month after his wrist was fractured in a bomb attack on his team’s bus.

“There’s good news,” Dortmund said in a statement. “Central defender Marc Bartra is back in team training exactly 29 days after undergoing an operation on his right hand and wrist following the bomb attack on the Borussia Dortmund team bus.”

Bartra said in a tweet, “I’ve been looking forward to this moment for weeks! So happy to be here today. Can’t wait to compete again next to my team mates!!”

Bartra was still wearing a cast at training.

The 26-year-old Spaniard was injured when three bombs exploded next to the team bus before their Champions League quarter-final first leg against Monaco on April 11.

Police have accused a 28-year-old German-Russian man of carrying out the attack, allegedly hoping to tank the team’s share prices and profit on subsequent transactions.

The German Federal Public Prosecutor maintained that Sergei W. was “highly suspicious,” but according to research by broadcasters NDR and WDR and paper Süddeutsche Zeitung, the examination of evidence and materials resulted in “no further explicit proof.”

The decision to delay the game just a day caused a rift within the club, with sporting director Michael Zorc and club CEO Hans Joachim Watzke exchanging barbs in the media and coach Thomas Tuchel losing support.

Dortmund are in third place in the Bundesliga standings with two rounds left to go.

Bundesliga relegation: Who is each side’s key man in the battle to beat the drop?