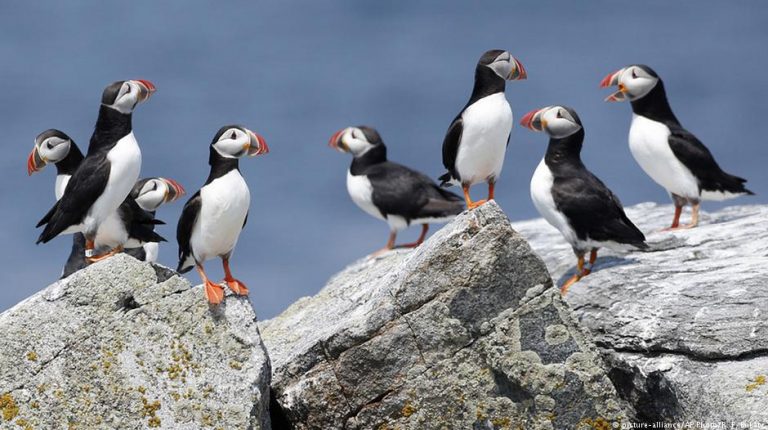 All certainties on environmental protection have been cast into doubt as the UK leaves the EU. The move could yet be a boost or a curse for Britain’s wildlife, which has been in steady decline.Thousands of seabirds cling to the cliffs, their high-pitched calls carried far across the water by the strong wind. Volunteers talk of porpoises and grey seals being spotted in the waters at dawn. So far, so biodiverse, at the Royal Society for the Protection of Birds’ (RSPB) Bempton Cliffs reserve in northern England. But the one bird that the bank holiday crowd are really here to see is harder to spot.

The puffin is a regular visitor between April and September, and is all over the reserve’s buildings and signage. But its numbers are declining; last month, the puffin made it onto the “red list” of threatened birds in the United Kingdom, where a quarter of the country’s species are now registered.

Reversing this and other species decline is a tough challenge. As Britain prepares to leave the European Union, the uncertainty created by this complicated task has many conservationists worried about the future of UK biodiversity, and wildlife and land in the countryside.

“We need to make sure that as we leave the EU, the laws and policies relating to our seas take our globally important seabird populations into account,” says Martin Fowlie of the RSPB. “We need to protect important feeding grounds for mobile species like puffins.”

“The EU Birds and Habitats directives are probably the best conservation legislation in the world,” Ariel Brunner, senior head of policy for Birdlife Europe, told DW. “But their implementation is often poor, with many gaps, a lack of enforcement and a lack of funding.”

Brunner says that many of the problems affecting UK bird populations are mirrored on the continent – intensive agriculture has been the chief driver of losses, with little respite granted by the Common Agriculture Policy.

The challenges facing British biodiversity are worrying. A landmark State of Nature report, published at the end of 2016, described the UK as “one of the most naturally depleted countries in the world,” with the hedgehog – a once-common species – suffering catastrophic population losses.

Insects and invertebrates, which make up 97 percent of all animal species, are in real trouble, with a 59 percent in decline since 1970.

The report also pointed out that, while there have been some successes in terms of habitat recovery, overall public funding for biodiversity has fallen by a third since 2008.

Butterflies will play a central role in government agency Natural England’s response to the biodiversity crisis. Working with numerous organisations, it is investing 4.6 million pounds (5.5 million euros) of national lottery funds into its Back from the Brink project, which aims to save endangered species.

One project will see the chequered skipper butterfly – absent from the UK since 1975 – reintroduced in Dorset, via cooperation with Belgium.

Nigel Bourn is the director of science and conservation at Butterfly Conservation. He says projects like Back from the Brink need to run alongside more long-term sustainability policies.

“The countryside is being throttled,” he told DW. “But what conservation groups have shown in the last 30 years is that with the right resources, we can turn around the decline of really rare species, such as the large blue [butterfly] and the stone curlew.”

A step into the unknown

Britain’s long-term environmental policy will become clearer when the government publishes its 25-year strategy for nature, originally expected in summer 2016. The snap general election, scheduled for June 8, has meant that its release has been put on hold.

The current conservative government, predicted to win comfortably in June, has pledged to boost nature and cut the costs of environmental damage – and the Wildfowl and Wetlands Trust has urged ministers to deliver on that pledge.

But Stephen Hinchley, who heads policy on Brexit for the RSPB, says he is concerned about the effect Brexit will have on government action. “The worst-case scenario is that essentially we get declining conservation action,” he told DW.

“It would be a decline by a thousand cuts rather any single action.”

Conservation groups are also concerned that the loss of the UK’s involvement in the EU Commission and the European Court of Justice, which enforce legislation, could cause problems.

Add to that the risk that not all EU directives will be successfully transferred to the UK statute books.

Given the interconnected nature of ecosystems, and the species involved – including the puffin – a coordinated conservation approach with Europe will remain important. As will a strong EU, says Brunner.

“The real danger is a disintegration of the EU. That would effectively kill any prospect of a coordinated, continent-scale response to environmental challenges – with catastrophic consequences,” Brunner says.

Hinchley agrees collaboration is key. “The best-case scenario is: We get a good partnership agreement with the EU, with a substantial chapter on future cooperation on environment and climate,” he told DW.

For Bourn, his level of optimism depends on the day of the week – but he says he does think the “glass is half-full.”

“Hopefully we can show Europe how fantastic agriculture can be if it is given the right encouragement to look beyond pure production,” Bourn says.