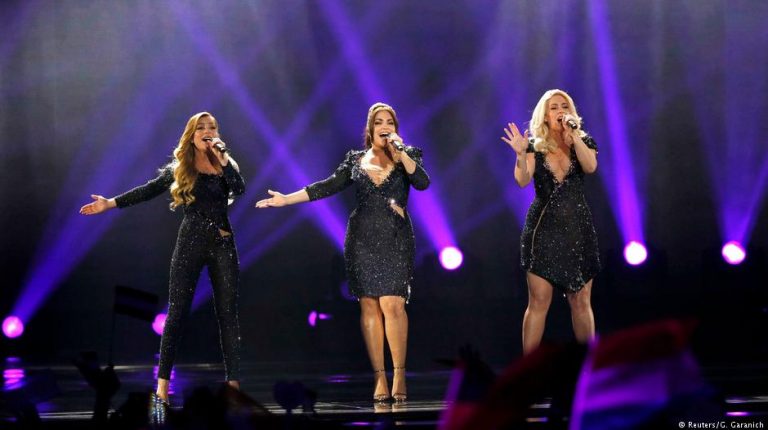 Acts off the beaten track did well in the second semi-final for the Eurovision Song Contest and three sisters from the Netherlands impressed with their harmony. Among those missing out were Switzerland and Ireland.The eight countries to fall out of contention in second semi-final voting by television audiences and expert juries on Thursday were Serbia, Macedonia, Malta, Ireland, San Marino, Switzerland, Lithuania and Estonia.

The ten that made their way into the final were Austria, Romania, The Netherlands, Hungary, Denmark, Croatia, Norway, Belarus, Bulgaria and Israel.

Rounding out the lineup are the “big five,” the main contributors to the European Broadcasting Union (EBU) – Germany, France, Great Britain, Italy and Spain – and the host country, Ukraine.

Exceptions to the rule

The second semi-final show presented a number of women singers in flowing dresses delivering sweeping ballads, such as Denmark’s Anja Nissen, singing “Where I Am.”

But off the beaten track songs included Norway’s entry “Grab the Moment,” a weird and wacky rap/electronic piece enhanced by precisely calibrated audio and visual distortion effects in the televised transmission.

A sample of the kind of fare that only Eurovision can serve up was Romania’s “Yodel It!,” a creative blend of rapping and yodeling.

In “My Friend,” Croatia’s Jacques Houdek vacillated between baritone operatic singing and falsetto, backed up by a cello, a violin, generous amounts of pyrotechnics and an LED background with images not to be outdone for sheer kitsch.

Hungary’s Joci Pápai did some tremulous singing in the song “Origo,” also complemented by pyrotechnics and an added female gypsy dancer. It was seen as something of a breakthrough that an ethnic Roma sang the entry as Roma suffer discrimination in the central European state.

Three seventeen-year-olds – Isaiah from Australia, Blanche from Belgium and the youngest of the three, Kristian Kostov from Bulgaria – all proceeded to the final on Saturday. In “Beautiful Mess,” Kostov displayed a big voice and secure delivery from a child-sized body.

Infectious smiles and upbeat optimism were offered by Nathan Trent of Austria, evidently aware of his charisma. In similar style, Imri Ziv, sang and danced the energetic “I Feel Alive.” Generous smiles from both young men were mirrored in the audience and in the press room.

Many of the 9,300 observers in Kyiv’s International Exhibition Center and veteran observers said that seldom has the party mood been better or the cheering more sustained.

Finally, mention must be made of the most musically perfect act of the evening: the three sisters from the Netherlands who named their group after the O’G3NE gene they share. Their song “Lights And Shadows” is a perfect blend of wonderfully harmonizing voices which is both sad and uplifting.