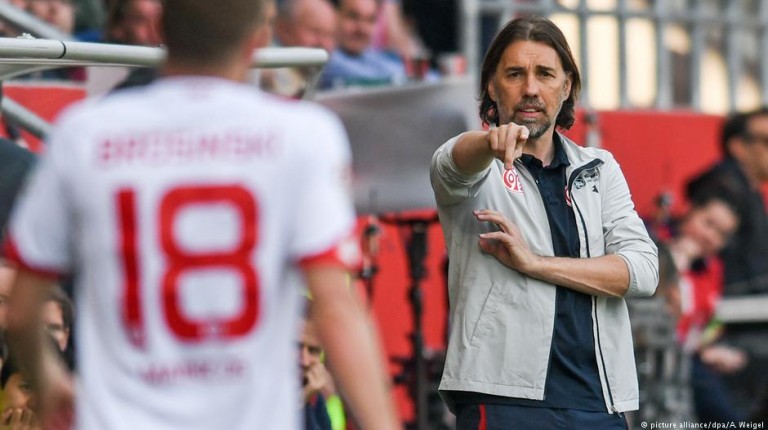 It was a thrilling afternoon of contrasts – German football’s traditional elite against the energy drink-backed newcomer, the reigning champions against the second-placed challengers, the Bundesliga’s oldest squad against the youngest. Yet the two goal-scorers who personify these contrasts the most also have a huge deal in common, and played decisive roles in Saturday’s nine-goal thriller.

Aged only 21, RB Leipzig’s Timo Werner became the first German striker to score over 20 Bundesliga goals at such a young age since Cologne’s Dieter Müller in the 1974/75 season. Werner found the net twice and hit the post in an exceptional performance as the newly-promoted side put four past the champions – but even he was outshone by Arjen Robben.

At the opposite end of the spectrum, Bayern’s 33-year-old winger is showing no signs of slowing down in the twilight of an astonishing career. It was his shot which came back off the bar for Robert Lewandowski’s 84th minute strike, before the Dutchman set off on a solo run, beating Bernado and Stefan Ilsanker to score a sensational 95th-minute winner.

Bayern Munich and RasenBallsport Leipzig may represent different faces of German football, but in Robben and Werner, and a commitment to offensive football, they also have a great deal in common.

Mainz’s survival is a testament to unity

“Trust and strategy are more important than chaos and bad energy,” said Mainz 05 coach Martin Schmidt after his side secured their Bundesliga status with a 4-2 comeback win over local rivals Eintracht Frankfurt.

The carnival city has come together in recent weeks, united in pursuit of a common goal, and that unity has been reflected in Schmidt and his team. A 1-0 win over Hertha Berlin set the tone before a battling 2-2 draw away at Bayern Munich. Avoiding defeat away to relegation rivals Hamburg was also key before Schmidt’s side showed all their character to come from 0-2 down against Frankfurt.

Individual quality from the likes of Yoshinori Muto and winter signing Bojan has been lacking at times this season but they delivered when it mattered this weekend, the former Stoke City man delivering a lovely ball for the Japanese striker to head Mainz into a 3-2 lead.

“100% commitment to our goal” was the motto launched by hardcore supporters in April as they rallied behind their relegation-threatened team. Everybody involved with 1.FSV Mainz 05 has now been richly rewarded.

Cologne and Leverkusen heading in opposite directions

Cologne have earned admirers after completing a transition from a chaotic, financially-stricken yo-yo club to a well-run, professional outfit – and their performances on the pitch have had their fanatical supporters dreaming of Europe.

They could have taken a huge step in Leverkusen after Milos Jojic and local youngster Lukas Klünter fired them into a 2-0 lead, but sloppy defending allowed Leverkusen back into the game as the derby ended 2-2. Assuming Freiburg don’t win in Munich, victory over Mainz next week will see Cologne return to European competition for the first time since 1997.

Despite the comeback, Bayer Leverkusen didn’t expect to be celebrating Bundesliga survival this season. Their stated aim was to cement a place within Germany’s top four but they are heading in the opposite direction. From Jonathan Tah and Benjamin Henrichs at the back to Julian Brandt and 17-year-old sensation Kai Havertz going forward, there is no shortage of talent in the Leverkusen squad, but successive coaches have failed to mould a group of individuals into a team.

The decision to appoint Tayfun Korkut in March was a strange one and the coach has only won one game out of ten (a 2-0 win away at doomed Darmstadt). CEO Michael Schade confirmed post-match that Korkut would indeed be leaving the club at the end of the season and the hunt for a new, long-term coach will begin. They could learn something from a quick glance down the Rhine.

At the end of a tumultuous season which has seen Borussia Dortmund endure a terrorist attack and a partially-closed stadium, the club was the subject of more negative headlines this week after news of a rift between coach Thomas Tuchel and CEO Hans-Joachim Watzke became public.

Despite serious doubts over his future at the club, Tuchel appeared remarkably upbeat ahead of his team’s match against Augsburg, laughing as he declared: “It’d be great if we all worked better together! Let’s see what happens at the end of season. I’m not naïve, all I can do is train my team and do my best.”

After having automatic Champions League qualification in their own hands after beating Hoffenheim last week, Dortmund were held to a frustrating 1-1 draw by the relegation-threatened Bavarians. Tuchel’s side also suffered a huge blow as Julian Weigl was stretchered off in tears with a broken ankle. The influential midfielder will now miss the final game of the season against Bremen and the cup final against Frankfurt.

Too little, too late for Ingolstadt but HSV should take heed

When Maik Walpurgis replaced Markus Kauczinski in November, Ingolstadt had yet to win a game. The Schanzer have since racked up eight Bundesliga victories, including three on the bounce against direct relegation rivals Mainz, Augsburg and Darmstadt last month. They also deserved more from games against Hoffenheim, Cologne and Dortmund but it was ultimately too little, too late.

Still, if Ingolstadt proved the value of victories in relegation “six-pointers” against your closest rivals, giving themselves a fighting chance of escaping the drop, it is a lesson which Hamburg have clearly failed to heed. In a favorable run-in including three other relegation candidates, HSV have won none of their last five, although Pierre-Michel Lasogga’s late equalizer away at Schalke will have lightened the mood.

Markus Gisdol’s side must now beat Wolfsburg next week if they are to avoid a third relegation play-off in four years. The stakes could hardly be higher but is time finally running out for the Bundesliga’s only surviving founder member never to have been relegated?

Tayfun Korkut to leave Leverkusen at end of season

Bundesliga relegation: Who is each side’s key man in the battle to beat the drop?