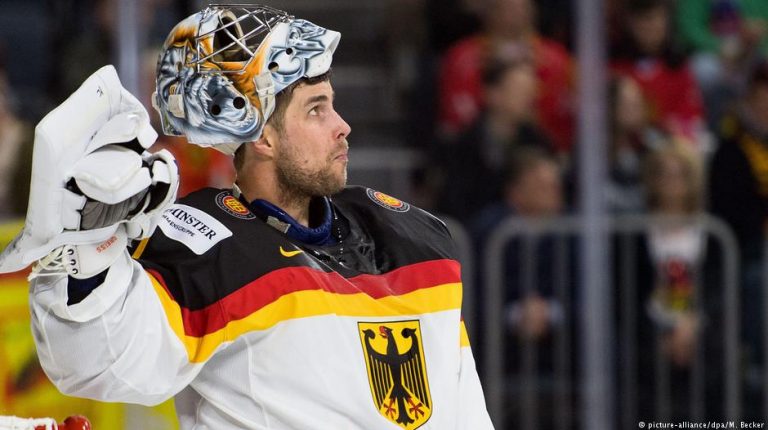 Germany goalie Thomas Greiss is coming under fire for “likes” he gave to some political posts on Instagram. The German hockey association has said he will face no disciplinary action despite the media outcry.Just hours before Germany took to the ice in a key group-stage game of the Ice Hockey World Championship in Cologne on Friday night, the sports media were abuzz over a story first reported by public broadcaster Deutschlandfunk earlier in the day.

The report said that national team goaltender Thomas Greiss had “liked” a number of posts on Instagram that expressed support for US President Donald Trump – as well as strong disapproval of former presidential candidate Hillary Clinton – and it provided Instagram screenshots as proof. One of the images Greiss liked shows someone wearing a T-shirt that reads “Guns don’t kill people, Clintons do.” Another shows an image of Trump as a knight with sword in one hand while he holds up what appears to be the severed head of Hillary with the other.

The one that has caused the most controversy, though, compares Hillary Clinton to Nazi leader Adolf Hitler. The Instagram post consists of a portrait of Hitler accompanied by the words: “Never arrested, never convicted. Just as innocent as Hillary.”

Asked by the broadcaster for reaction to the likes that Greiss gave these posts, a spokesperson for the German hockey association (DEB) said that: “We have spoken to Thomas Greiss about his Instagram-likes. Thomas Greiss has withdrawn his likes from the pictures.” She also said there would be no consequences for the goalie, who plays for the New York Islanders of the NHL, and that this would not affect his place on the national team.

Greiss ‘not a right-wing extremist’

After Friday night’s game, which Germany lost 3-2 to Denmark in overtime, the team captain, former NHLer Christian Ehrhoff was asked about the controversy surrounding the 31-year-old goalie, who has been living in the United States for the past decade.

“I have known Thomas for a very long time and he has never done anything to attract attention in a negative way. I think he has the right to his political views and if he supports Trump that is his business,” Ehrhoff said. “What he liked was certainly unfortunate, but as a team… I have no problem with Thomas.”

On the bench due to upper-body injury

Greiss didn’t get the start in goal on Friday night, but sat on the bench while the backup, Danny Aus den Birken, played the entire game. Greiss had pulled himself early in the previous game due to an upper-body injury.

After Friday’s contest, head coach Marco Sturm said Greiss was still not 100 percent fit, which was why Aus den Birken got the nod. He said the decision had nothing to do with the controversy over Greiss’ likes on Instagram.

“This is not a topic of discussion for us in the team or in the dressing room,” Sturm said.

Due to the injury, Sturm has called up Philipp Grubauer of the Washington capitals, who along with Edmonton Oilers star forward Leon Draisaitl, is expected to join the team on Saturday.

Exclusion from from Winter Olympics?

Greiss, however, appears to be in hot water with the German Olympic Sports Confederation (DOSB). The DOSB’s president, Alfons Hörmann, threatened to exclude Greiss from the German team for next year’s Winter Olympics in Pyeongchang, South Korea.

“Anyone who acts or communicates in this way cannot be a member of the team in Pyeongchang,” Hörmann told the SID news agency.

However, in practice, this would appear to be a strictly symbolic, as the NHL has already said that it will not be sending its players to the 2018 Winter Games in the first place.

Greiss was not available for comment after Friday’s game.

For Marco Sturm, Germany are very much a work in progress