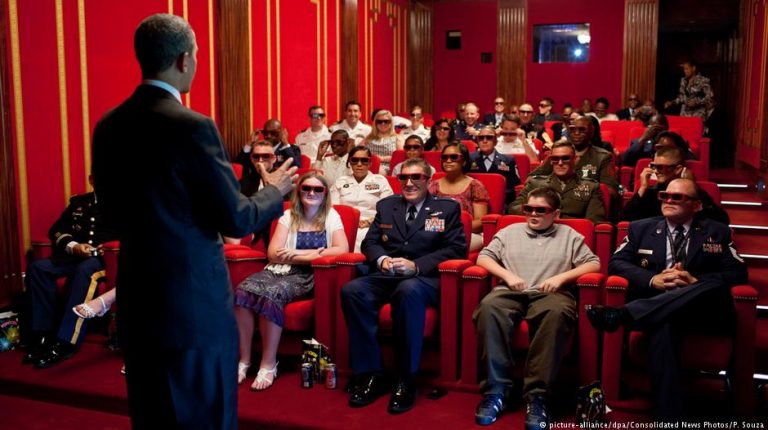 The White House movie theater can now be visited during public tours. President Donald Trump, shortly after his inauguration, watched “Finding Dory” here with his family, friends and staff.The movie theater built in 1942 had never been part of any public tour of the official residence of the US President.

First Lady Melania Trump decided to extend the areas open to the public: People should “have as much access as possible to the rich history and wonderful traditions” of the White House, she said.

Until now, tours of the White House included viewing official representative rooms and the library.

These tours are not usually available to visitors from abroad. US citizens have to book and reserve tickets well in advance via their congressional representative. The cinema is now part of the East Wing tour of the White House.

President Franklin Delano Roosevelt had a coatroom converted into the movie theater. Ronald Reagan had it remodeled in the 80s to include 51 tiered seats.

Over the years, the different presidents have used the cinema in various ways. In the first few decades, Dwight D. Eisenhower (1953 to 1961) proved to be the greatest movie fan among the presidents. He was particularly fond of westerns, most of all films starring Gary Cooper.

An even bigger movie fan was Jimmy Carter (1977 to 1981). During his time in the White House, he watched 480 films and was known to organize movie nights two or three times a week. The first film he watched after taking office was the political drama “All the President’s Men,” dealing with the Watergate affair, which led to President Richard Nixon’s resignation.

President Bill Clinton (1993 to 2001) had eclectic choices and enjoyed films such as “Schindler’s List,” “Braveheart,” “Naked Gun 33⅓: The Final Insult” and “The Big Lebowski,” while President Barack Obama (2009 to 2017) celebrated the 50th anniversary of “To Kill a Mockingbird” with a showing of the classic movie.

It is not yet known whether Donald Trump will make much use of the movie theater. It appears that he prefers to spend his evenings in front of the television, where according to media reports he likes to watch news programs.

The showing of “Finding Dory” was only briefly attended by Trump, according to a spokesperson. The movie was shown on the Sunday following Trump’s inauguration, when protests against the new president were rocking the entire country.

Lincoln, Nixon, Kennedy and the rest: US presidents in film

US gun lobby urges armed police in every school