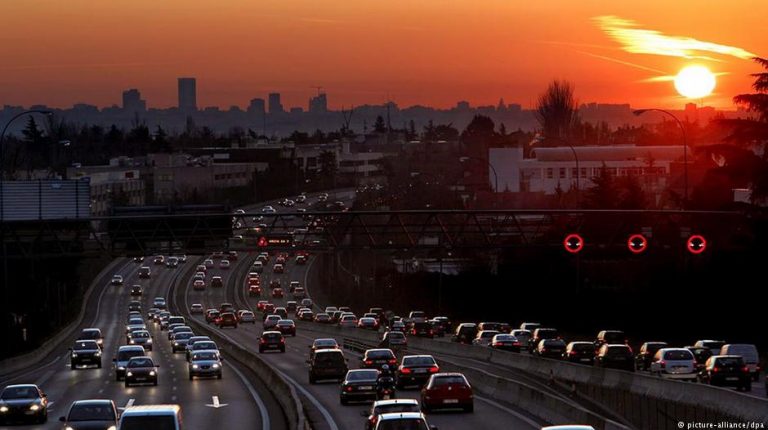 To fight air pollution, Madrid is among cities around the world that have vowed to ban diesel vehicles by 2025. This leaves car dealers with lots full of autos no one will buy – what will happen to all the diesel cars?At rush hour, bumper-to-bumper traffic belches out diesel fumes along Madrid’s Gran Vía, a six-lane artery that bisects the Spanish capital. The art deco facades lining the grand boulevard are blackened with soot.

“The pollution hurts my eyes, and I can feel it in my throat,” says commuter María Villallega, 48, who lives in the city center and walks to work. “I don’t own a car myself, and I’ll be happy when they’re not allowed here anymore.

“We need to protect the planet, and ourselves.”

Within three years, Gran Vía will be off-limits to most of this traffic. Only public buses, taxis, cyclists and pedestrians will be allowed. It’s part of Madrid Mayor Manuela Carmena’s plan to fight air pollution.

And by 2025, she has pledged to ban most diesel cars from the entire city.

Madrid’s air pollution has exceeded EU limits for the last eight years. Part of the problem is that in Spain, as in most of Europe, half of all cars run on diesel. By comparison, only around 3 percent of cars in North America have diesel engines.

Since the 1990s, European governments have levied lower taxes on diesel than petrol because it was understood to be more efficient.

German carmakers “lobbied very hard” for a switch to diesel in the 1990s, Rosenberg says. It was seen as a win-win – lower fuel consumption, and lower carbon emissions.

But while less carbon might better for the climate in some contexts, diesel cars produce other pollutants that are worse for human beings: nitrogen oxides and soot – tiny, toxic black particles.

The World Health Organization (WHO) says that every year, around 3 million deaths are linked to outdoor air pollution.

With toxins fouling the air in its big cities, and revelations of Volkswagen cheating diesel emissions tests, Europe appears to be set for a 180-degree turnaround on the fuel. Paris, Athens and Mexico City also plan to ban diesel cars and trucks by 2025.

In Madrid, sales of hybrid and electric cars are up almost 90 percent in recent months.

While that may be promising for the environment, it has created “total panic” among car manufacturers, says Javier Quintaná, a salesman at a large Ford dealership in Madrid. Half of his inventory are diesel cars. He even drives a diesel himself.

“What we’re doing is modifying [diesel] cars to limit pollution. In the factory, we can use additives so the cars emit less – to comply with air quality rules,” Quintaná says.

But it’s a tough sell. Madrid has already hiked fees for registration, road tax, emissions tests and parking permits for diesel cars. Quintaná says the majority of his sales have been diesel in recent years – but since plans for the diesel ban were announced late last year, he has sold mostly gasoline cars.

Some unsold diesel vehicles are being left to rust on a vast parking lot on the plains of La Mancha, south of Madrid. It’s a car depot where rental car companies unload their inventory, and used-car buyers come to find deals.

“I have no idea what to do with all these diesels,” says Miguel Buendía, who sells used cars and scrap metal on the lot. “Their value will keep dropping, and if I can’t sell them in this country I’ll have to sell them elsewhere.”

Rosenberg predicts a new international trade could pop up to find homes for these cars in countries that are still diesel-friendly.

“There will be this enormous number of used diesels which no one wants to buy, that you won’t be able to drive in the city,” he says.

“My guess is an industry will appear out of nowhere to ship all these cars further east and further south, to eastern Europe and Africa.”

But with air pollution in many cities in these regions already worse than in Madrid, health problems might be moved rather than solved.