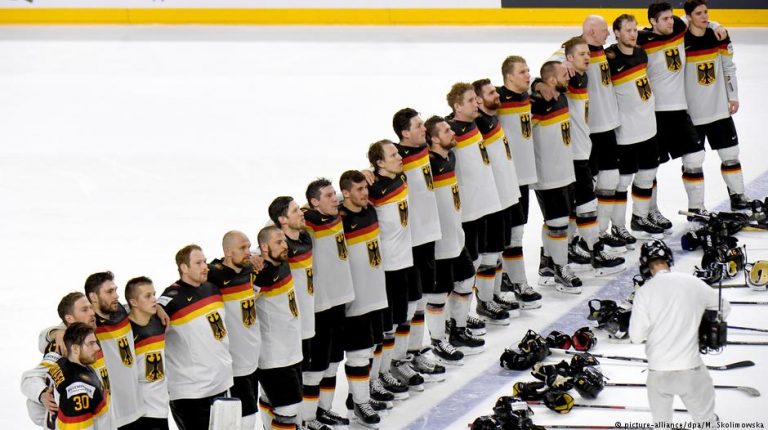 Germany made it all the way to the semifinals in 2010 the last time the world championship was played here. After some dark days for the national team since then, coach Marco Sturm has Germany back on the right track.As Germany’s national anthem was played after the national team’s dramatic win in a shootout in Cologne’s Lanxess Arena on Tuesday evening, Germany’s players stood on their own blue line, linked by arms around each other’s shoulders, singing along.

And most of the German fans in the rink sang along too, euphoric about what they had just witnessed, as their team, who looked to have thrown away an almost certain victory by conceding the tying goal late in the third. However, coach Marco Sturm’s team got a bit of luck, as Latvia’s defenseman Arturs Kulda was handed a debatable two-minute penalty with just over two minutes to go to put Germany on the powerplay. With 33 seconds left in the third, Felix Schütz scrambled the puck over the line to keep Germany’s hopes of advancing to the quarterfinals alive.

Then in the penalty shootout, Frederik Tiffels, a 21-year-old native son of Cologne, the only amateur on the team and a player unknown to most German fans prior to the tournament, beat Latvian goalie Elvis Merzlikins through the five hole to send Germany through to the quarterfinals.

Coach Marco Sturm didn’t sing along to the national anthem, but stood behind the German bench in silence, taking in the moment. You could read in his face the pride he felt in his team’s performance.

“It was just a great game. My team fought really hard. It was by far our best game of the tournament,” he said. We did get a bit lucky towards the end, but the lads really deserved it for their hard work, their ambition and their pride. It’s just an awesome feeling. This is why you play hockey!”

The luck Sturm referred to was that delay-of-game call on Kulda late in the game. What Sturm did not mention is that Germany’s first goal should never have been allowed, because when defender Christian Ehrhoff wound up for a shot from the blue line, the puck clearly left the zone, putting the play offside. Neither the linesman nor the Latvians noticed.

Out of the darkness

Germany have achieved their unspoken minimum goal for this “home world championship” – advancing to the quarterfinals. Long gone are the dark days for the national team, when Germany lost their way after former coach Uwe Krupp departed in 2010 a few months after the last world championship on home soil. That’s the last time the national team really caught fire, making it all the way to the semifinals before falling to Russia. After that, it seemed that the national team only made headlines for the wrong reasons, whether it be with Norway hammering Germany 12-4 under then-coach Jakob Kölliker in 2012, or more than 20 players turning down the invitation of his successor, Pat Cortina, three years later.

Key changes at the top

Everything changed with the election of Franz Reindl as the new president of the German hockey association (DEB) in the summer of 2015. His first move was to hire the inexperienced coach but vastly experienced and respected former NHL star Marco Sturm as the head coach and general manager of the national team. Suddenly, the days of players finding reasons not to join the national team for the world championship were gone. Everybody wants to play for Germany again.

“In the past couple of years this has been a team that has so much passion and will, we have really had some great experiences in the last little while,” veteran defenseman Moritz Müller said after Germany’s upset over the United States, when Germany gave up a 1-0 lead in the third but quickly replied for a 2-1 win.

Road only gets tougher

In fact, Germany have made a habit of giving up leads in this tournament, and Tuesday’s match was no different, as they allowed the Latvians to pull back three to first equalize and then take the lead late in the game. This is something they can’t afford to do against Canada, their opponents in the quarterfinals – if they can get a lead in the first place. Despite the gap in overall individual talent, though, Sturm is confident that Germans will give a good account of themselves.

“We have nothing to lose… We saw against the Americans that we can also beat top big (hockey) nations. We need a goalie, who like Thomas Greiss in Game 1, stops everything so we can achieve another upset,” Sturm said, before cautioning that “Canada is strong, we will have a lot to deal with.”

And what about that shooting star Tiffels?

“It’s one game, anything can happen,” he said.

For Marco Sturm, Germany are very much a work in progress