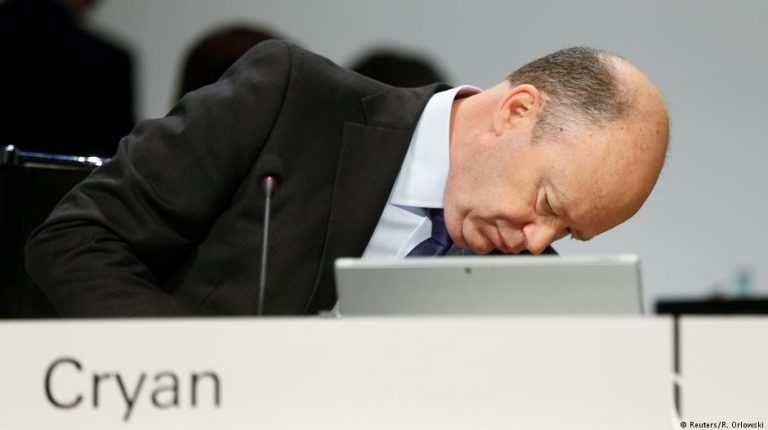 At its annual shareholder meeting, Germany’s scandal-hit Deutsche Bank has said it’s seeking to make former top managers pay for past mistakes. Investors want a bigger say in future capital increases. Deutsche Bank CEO John Cryan said that following several years of crises the lender “was now seeing the light at the end of the tunnel.” He pointed out that there would be no more major litigation procedures against the bank, saying “the worst is behind us.”

Cryan added that business was picking up in many fields of activity, including retail banking. He said 2017 would continue to be a year of restructuring. He insisted the bank’s full-year profit prospects had improved, thanks also to a more favorable business environment in Europe and the US.

Deutsche Bank’s supervisory board chief Paul Achleitner told the shareholder meeting on Thursday that former top executives, who shared responsibility for a number of financial scandals at the lender, should be prepared to make a financial contribution so as to help the bank shoulder its massive litigation and restructuring costs.

“I can tell you today that the supervisory board is in intensive talks on the issue with the people in question,” Achleitner said in Frankfurt. “There will be a final decision in the next few months, ensuring a substantial contribution from those concerned.”

Achleitner himself is hoping to get re-elected for a second term. He said he saw the lender moving in the right direction, leaving its scandals behind and striving to get to grips with current challenges ranging from stricter regulation and digitalization pressures.

Asset management group Union Investment indicated it would not give the board of Deutsche Bank a carte blanche to initiate further capital increases like the one earlier this year when the lender raised 8 billion euros ($8.91 billion).

It said it was not willing to issue a blank check to let the lender raise its capital by 39 percent over the next five years as requested by executives, arguing that this would give long-term investors a bad deal.

Big German investment companies such as Union, Deka, Allianz Global Investors or DWS have strengthened their resistance to large-scale capital increases at firms across the country with a view to getting a bigger say in mergers and other strategically important corporate moves.

There had been a good deal of anger and discontent when German conglomerate Bayer paid 60 billion euros to take over Monsanto in a move that did not require approval by shareholders.