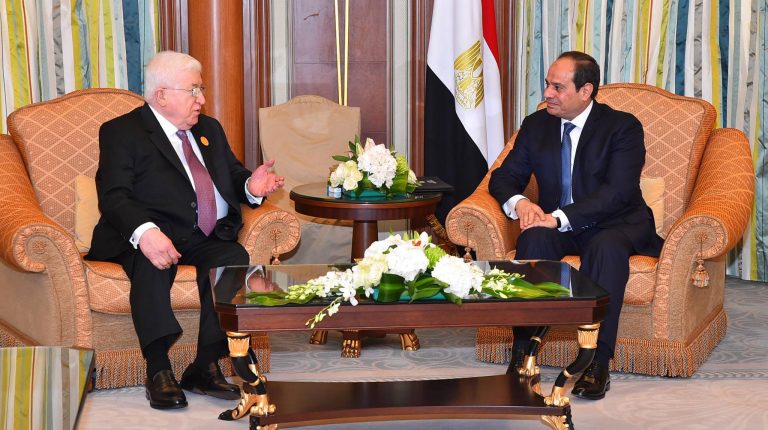 Egyptian President Abdel Fattah Al-Sisi held a series of meetings on the margins of the Islamic-American Summit in the Saudi capital, Riyadh. Al-Sisi started by meeting with the Iraqi president, Khedr Maasoum, and they discussed bilateral relations and the Iraqi situation.

Al-Sisi also met with the president of Tajikistan, Imam Ali Rahman, on Saturday. The Egyptian president praised the common cultural and historical characteristics between Egypt and Tajikistan, and he expressed Egypt’s interest in developing bilateral relations and exchanging expertise in several fields to achieve common interests​, the presidency spokesperson, Alaa Youssef, said in a statement.

Rahman asserted Tajikistan​’s keenness in bilateral relations with Egypt and its positive developments in the last three years. The two sides discussed during the meeting the perfect ways for boosting bilateral relations and stressed the importance of investing in the capabilities of both countries in order to boost the economic cooperation and the commercial exchange.

According to the statement, the two presidents discussed the international efforts in confronting terrorism, and they asserted the importance of Al-Azhar’s role in facing extremism. Also, Al-Sisi invited his Tajiki counterpart to visit Egypt on an official visit, and Rahman welcomed the invitation.

Moreover, Al-Sisi discussed with Marc Kaboré, his counterpart from Burkina Faso, the bilateral relations between Egypt and Burkina Faso and expressed Egypt’s interest in its relation with Ouagadougou and other African countries.

Al-Sisi praised the efforts of Burkina Faso’s president in boosting stability in the African country after the transitional period, and Al-Sisi invited Kaboré to visit Egypt. Kaboré expressed his country’s keenness in developing relations with Egypt.

Al-Sisi is visiting the Saudi capital, Riyadh, to attend the Islamic-American summit in the presence of US president Donald Trump, who is there on his first foreign visit.