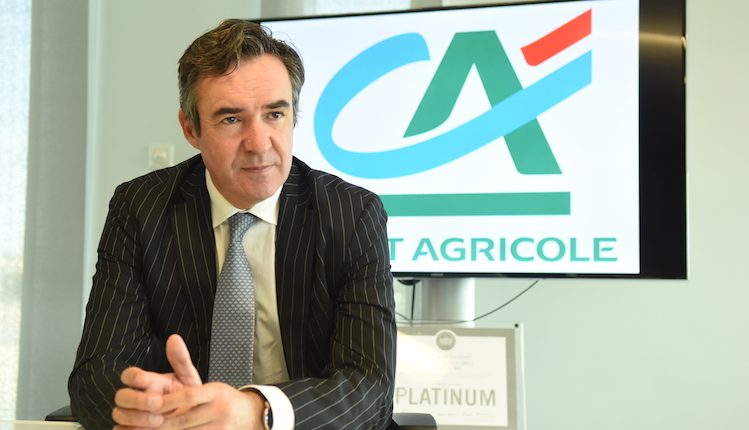 The chairperson and managing director of Credit Agricole Egypt, Francois Edouard Drion, said that the bank aims to finance various activities and economic sectors in Egypt, as well as retail loans, including cash or auto loans.

He told Daily News Egypt that his bank focuses on financing the food, pharmaceutical, real estate, energy, and automotive sectors, as well as the fields targeted by the Central Bank of Egypt’s (CBE) initiatives.

He added that Credit Agricole also supports companies operating in the energy sector and aims to increase its investments in this sector during the coming period, pointing out that Egypt is expected to become a major exporter of natural gas in 2018.

Regarding the nature of the bank’s activities in Egypt, Drion said that the bank’s strategy relies on providing high-quality services and offering integrated packages for large, small, and medium sized companies, as well as retail and senior clients.

This was announced in a press conference held by the bank last week on the occasion of the 10th anniversary of its opening in the Egyptian market. The event was attended by the bank’s leadership and a large number of its customers.

“The bank’s celebration of its 10th anniversary in the Egyptian market is a milestone in its history, and this encourages us to achieve sustainable growth in Egypt for many years to come,” said Drion.

He stressed that the bank is committed to providing new technological solutions in the banking services to meet the needs of its customers and achieve all their aspirations. He also affirmed the bank’s commitment to contribute to all major national projects in Egypt and support all segments of Egyptian society.

CreditAgricole launched its activities in the Egyptian market after acquiring the Egyptian American Bank in 2006. It belongs to the French CréditAgricoleGroup.

According to Drion, the bank is not considering leaving the Egyptian market. On the contrary, the bank has a strong expansion plan for the coming years.

“We entered the Egyptian market 10 years ago and are determined to continue and expand in it,” he said.

Drion was appointed to his position at the bank on 1 December 2011.

He had worked at BNP Paribas Bank for more than 14 years in several positions, including the head of retail banking in the Middle East and CEO of the bank in Algeria, before he became CEO of Credit Agricole’s branch in Serbia.

Drion graduated with a degree inpolitical science and received a postgraduate degree in finance from the Paris Dauphine University.

According to Drion, about 2,500 employees work for Credit Agricole Egypt. The bank has 80 branches and 160 ATMs across the country and is considered one of the largest taxpayers in Egypt.

“When Credit Agricole acquired the Egyptian American Bank, the bank’s customers did not exceed 1,000 people, while we now have 360,000 customers, of which 6,000 are in the SME sector only,” Drion said.

He added that the bank has succeeded in attracting these customers through providing various services, including internet banking and mobile services, stressing that the bank aims to provide the best customer service in Egypt.

Drion added that the bank succeeded in attracting about 70,000 customers through mobile phone applications, noting that the bank seeks to play a prominent role in achieving financial inclusion.

According to Drion, the bank’s market share in Egypt is currently estimated at about 2%, and they seek to double it in the coming years.

The bank has a capital of EGP 1.244bn, and it also receives support from the parent group in France.

He revealed that the parent group had granted the bank a $30m loan to support its capital base, and the bank has already received the first tranche of the loan in April 2017.The second tranche is due by the end of June.

He pointed out that the bank’s new slogan—”An integrated bank for you”—represents a commitment to continuously develop its services.

In this regard, Omnia Salem, the head of the bank’s marketing sector, said that the bank launched a new group of services allocated to people aged 18 to 26, under the name “MyFirst”.

She added that the bank was keen to offer its services during Financial Inclusion Week in several Egyptian universities, especially in Upper Egypt, in order to attract this segment to the bank. She revealed that her bank succeeded in opening 500 new accounts during that week.

According to Drion, the number of banking customers in Egypt is still small, so there is an opportunity to attract more customers and achieve financial inclusion.

He pointed out that this could be achieved by upgrading the banking services via mobile phone and internet, installing more ATMs, and expanding in retail loans, such as auto loans.

He added that the bank helps foreign investors to invest in the Egyptian exchange and debt instruments issued by the Egyptian government.

According to Drion, the bank is one of the most prominent investors in the Egyptian debt instruments, estimated at about 30% of the total investment portfolio of the bank.

Drion said that the Credit Agricole Group is very optimistic about the Egyptian economy and its performance in the coming years. He pointed out that the Egyptian market is now “healthier” after the Central Bank of Egypt’s (CBE) decision to liberate the exchange rate.

“The flotation of the pound was a huge decision and is set to positively affect the Egyptian economy and the banks operating in the market during the coming period,” according to Drion.

Despite the shock caused by the flotation decision and the high inflation and deficit rates in the state’s general budget, the Egyptian economy is still on the right path of reform and its growth rate is better than the previous years, he added.

“The bank’s earnings in foreign currency after the flotation reached about $1bn, and they were directed to cover the bank’s foreign exchange requests to finance imports,” saidDrion.

He added that “the companies had the largest proportion of the bank’s loans, while the retail loans to individuals reached about 20%.”

“The bank has about 6,000 SME customers whose loan portfolio under the CBE’s initiative accounts for 10-11% of the total credit portfolio,” said WaliLotfy, head of retail banking at Credit Agricole.

In response to a question about the impact of the CBE’s regulations on the retail sector of the bank, Lotfy said these controls did not affect the size of the bank’s retail sector, adding that they still provide auto loans.

He explained that those regulations apply to everyone, and the most efficient bank would succeed, pointing out that the financing agencies that do not follow the CBE have caused the current imbalance suffered by the market.

With regards to the mortgage finance, Credit Agricole Egypt has launched two programmes for this sector; the first operates in accordance with the CBE’s initiative for the low and middle income class, and the second was aimed at providing more credit facilities depending on the customer’s needs.

According to Olivier Palima, head of the information technology sector at Credit Agricole, the bank has increased its investments in technological systems by 25% over the past year.

He revealed that the bank would provide new services in the coming period, including a non-cash loan package.

The bank is scheduled to launch new mobile applications within a few days to allow customers to register online, pay bills, and transfer money, as well as pay instalments of loans and credit cards to other bank customers.

He added that the bank’s non-performing loans reached 4.2% during Q1 2017. The bank has increased the provisions of these loans to EGP 88.2m.

“The bank’s capital adequacy ratio registered at 15.14%, exceeding the required rate by the CBE of 11.25%,” according to Drion.

He said that the bank’s management is proud of the positive results achieved during Q1 2017, which confirms that the bank continues to grow.

He said that the new body comes in the framework of the bank’s belief in the importance of social responsibility and its commitment to participate in various initiatives that support the society.

Since 2012, the bank has launched some initiatives of its own and participated with other specialised partners from civil society organisations in the fields of health, education, environment, and community development, according to Drion.

He said that the bank had allocated about 1.25% of its 2016 profits to social responsibility.

He pointed out that the bank’s philosophy of social responsibility is based on promoting the idea of ​​sustainability, participating in comprehensive development projects, contributing tojob creation, engaging employees and customers in the community service, andpreserving natural resources by rationalising the use of water, electricity, and paper.

US first-quarter growth much stronger than expected