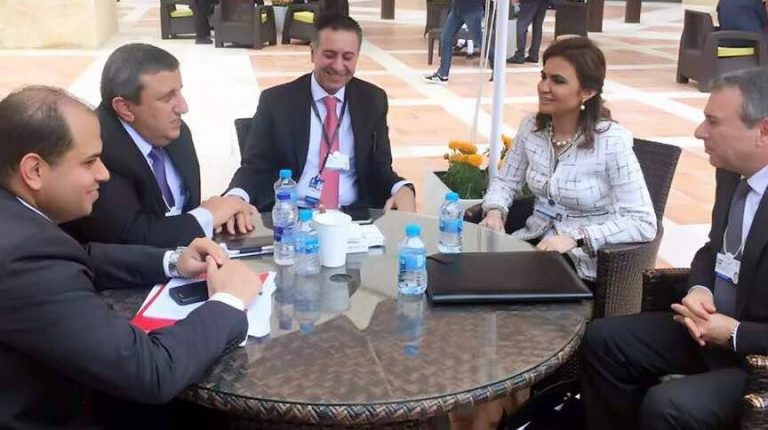 Minister of Investment and International Cooperation Sahar Nasr held a meeting with Jordan’s minister of industry and trade Yaroub Al Kodat on Saturday, according to a press release, to discuss the Egyptian-Jordanian Supreme Common Committee’s role in improving the bilateral relations between Egypt and Jordan.

The statement noted that the meeting happened according to Prime Minister Sherif Ismail’s orders.

Al Kodat welcomed Nasr and stated that the relations​ between both countries are strong, adding that the committee held a meeting back in August headed by the prime ministers of both countries.

Moreover, Nasr added that both parties of the committee should work together to improve relations in all fields in the current time and the future.

According to the statement, Nasr added that the committee is the first of its kind in the whole Arab region.

Nasr is in Jordan to participate in the economic forum of North Africa and the Middle East.

She also discussed the ways of developing cooperation in the fields of small and medium enterprises (SMEs) and future plans of cooperation between both countries, as well as the different economic fields, in order to increase the rate of GDP growth rates and implement sustainable development.

Nasr agreed to hold another meeting with the Al Kodat during the committee’s meeting in August, as well as to start preparing for the meeting by July, the statement read.

However, the minister met representatives of 14 Egyptian SMEs in Jordan, according to the statement that was issued on Sunday.

She noted that the Egyptian government is working with the government of Jordan to support SMEs in the region.