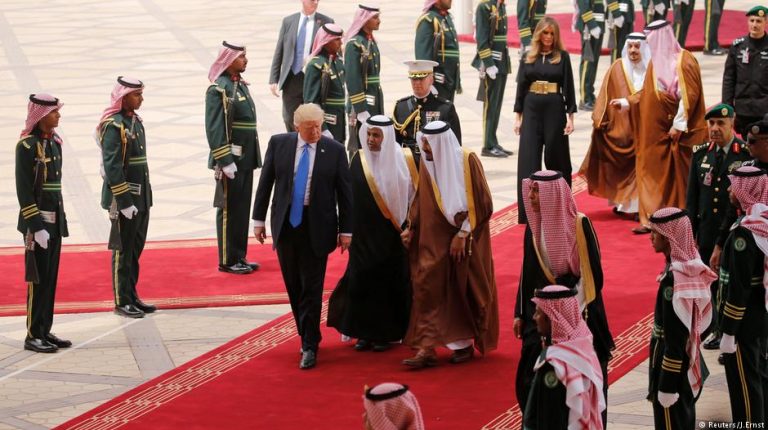 Following the conclusion of US-Saudi talks, the unprecedented US-Arab-Islamic summit kicked off in attendance of 56 Arab Muslim leaders and US president Donald Trump.

The summit was announced a few weeks ago and aims to discuss ways of combating terrorism and solutions to regional crises, especially the Palestinian issue.

On the sidelines of the summit, President Abdel Fattah Al-Sisi met with Trump on Sunday, in which Trump expressed his aspiration to visit Cairo soon, asserting that this will be listed on his work schedule, as there is a lot to discuss with Egypt.

Trump praised Al-Sisi and his administration, depicting him as a friend.

The Saudi Supreme Council of Scholars praised the summit, hopeful that it would result in ways to eliminate terrorism. The summit was further seen by Saudi officials and experts as “historic”, not only for being the first of its kind, but for proving that Muslim countries could have deep and strong relations with the US.

Prior to the US-Arab-Islamic summit, another two summits took place between Saudi King Salman and the US president. During the first, the Saudi-US summit, a deal valued at $110bn was signed between the two countries.

Meanwhile, during the US-Gulf summit, a memorandum of understanding was signed among Gulf countries and the US to prevent funding of terror organisations.

Other military agreements were signed at a value of over $400bn.

Al-Sisi has been focusing his talks about counterterrorism on combating sources that are funding terror organisations, along with other mechanisms related to improving religious discourse and international community cooperation.

Samir Ghattas, parliament member and researcher at Al-Ahram Center for Strategic Studies, commented that he does not believe that this summit would help with the Palestinian issue, as both sides sponsoring the summit—Saudi Arabia and the US—are only concerned with their own countries’ interests.

“I don’t think the summit will carry any professional force to solve the current crises, as both sides have different reasons and motives,” Ghattas said.

For the significance of Egypt’s presence, he said that Egypt aims to support the US; however, it is not preferable to join the NATO coalition, as Egypt was not initially part of the conflict with Iran.

Ghattas also commented on the military deals signed between the US and Saudi Arabia, saying that it is not beneficial for fighting the Islamic State organisation, as the weapons agreed upon are not used against them.

Meanwhile, political researcher Atef El-Ghamri told Daily News Egypt that the summit is a preliminary step for finding solutions for regional issues, especially since Trump has already started forming a certain strategy for the region.

He added that Trump’s presence among Arab leaders to discuss regional crises is important, since he is leading the country that has the greatest impact on the Middle East.

Trump’s first foreign tour started with Saudi Arabia, which has warmly greeted him and the team accompanying him, which include dozens of US business leaders, including the heads of JPMorgan Chase, Citigroup, Dow Chemical, and General Electric.

Opposite to former US president Barack Obama’s visit after his inauguration, who started his first Middle East visit with Egypt, Trump began with Saudi Arabia. Ghattas commented on this, saying that this reflects both leaders’ visions, as Obama targeted political reasons, being aware of the political importance of Egypt, while Trump focuses more on economic issues.

US relations with Egypt and Saudi Arabia were very tense during Obama’s tenure; however, it is currently witnessing significant improvements following Trump’s inauguration.