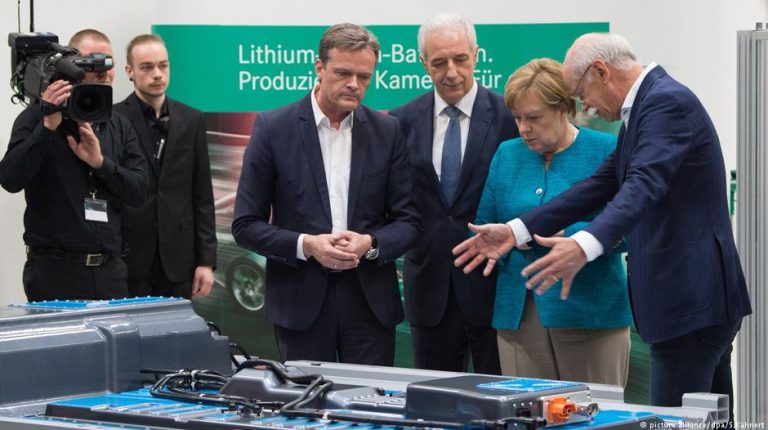 During a groundbreaking ceremony in eastern Germany, premium carmaker Daimler has confirmed its e-mobility ambitions. The company is building another huge factory for the production of e-batteries.Automaker Daimler on Monday broke the ground for a second e-battery production facility in Kamenz, Germany, where its subsidiary Accumotive had already been churning out batteries for the firm’s all-electric and hybrid models since 2012.

In the presence of German Chancellor Angela Merkel, Daimler CEO Dieter Zetsche said the carmaker was aiming to be a driving force of change in the automotive industry and in the age of e-mobility.

Daimler had said it was willing to pump roughly 1 billion euros ($1.1 billion) into a global e-battery production network, with half of the resources going to the new facility in Kamenz.

Producing batteries locally was key to long-term success, the company emphasized, as stricter emissions regulations made the switch to e-cars a necessity.

Daimler-Accumotive’s new factory is to be operational by mid-2018, with the local workforce to gradually grow to roughly 1,000 by 2020.

Until 2022, Daimler wants to produce more than 10 all-electric passenger cars.

Chancellor Angela Merkel said in Kamenz her country and its car industry needed to invest heavily to ensure it was not left behind in the global shift to electric vehicles.

She came under fire earlier this month when she admitted that Germany was likely to miss the government’s target of bringing 1 million electric cars onto the roads by the end of the decade.

But Environment Minister Barbara Hendricks insisted Monday the target was reachable, adding that ambitious goals needed to be set so that opportunities for the environment and the motoring sector were not missed.