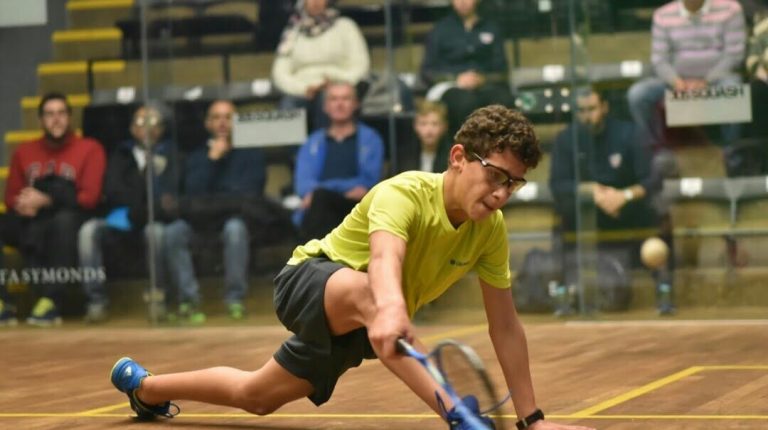 In his 15 years, the passion of squash was the only controlling emotion over young Egyptian athlete Ibrahim Qabany, which drove him to a long chain of success; winning the first place in the 2017 national championship was its latest.

This year’s award at the National Championship also marks the second participation of Ibrahim, as he won the second place at the U11 division back in 2014.

Ibrahim’s obsession with squash started at the age of 4 when he watched his father, Mohammed Qabany, a former squash athlete participating at several national and international championships. That’s when he started training regularly, not knowing that only 12 years separated him from being Egypt’s best junior squash player.

His mother, Rehab Negm, expressed that the pride her son brings the family comes along with disappointment due to having zero support by any officials, sponsors, or the Ministry of Youth and Sports, saying, “We don’t receive any sort of help or funds from any governmental or private bodies.”

“Despite all of the awards he managed to win for Egypt, we [his parents] still take full responsibility for handling all of the financial and emotional support for our son,” Negm told Daily News Egypt.

Something that Ibrahim agreed with, saying, “Squash is an extremely costly sport. Among all of the other sports, I believe it’s the most financially consuming one.”

Nonetheless, these struggles never stopped Ibrahim from believing that he plays in the name of Egypt, following the path of tens of Egyptian squash legends, “When I take part in one of the international championships, the pressure is all about presenting a good image of myself and the country.”

“Even when I play with much stronger players or more experienced ones, my ultimate goal is to focus on not making any mistakes that might ruin my name or my country’s,” he added.

Ibrahim explained that most of the players participate in a certain division in the national championship close to one another in their levels, saying “that makes every single small mistake count, causing one to either win a lifetime title” or to live with the guilt of questioning what could have happened if the player was more focused.

“Before Ibrahim went to the final game of the National Squash Championship, the pressure he was under made him believe that he wouldn’t be able to win, although the other player’s qualifications were close to Ibrahim’s,” his mother said.

That’s why when he won, disbelief took over happiness for the achievement accomplished, she asserted.

What adds to the pressure on squash players from Negm’s point of view is the lack of media support and coverage as well. “With no popularity base for the game in Egypt, the only supporting system these players have are their families,” he stated.

Despite the fact that seven out of the ten best squash players worldwide are Egyptians, local media outlets still neglect spotlighting the game, instead focusing on football.

“When a national football team is playing for the first place in a national or international championship, media outlets largely frame the event, yet when any Egyptian squash player plays for the world’s first place, the match is not even aired on TV!” Negm disappointedly concluded.