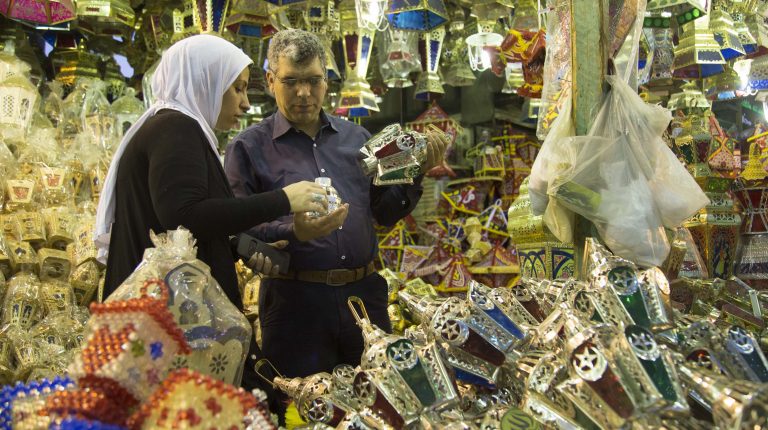 Egypt has been a nation that celebrates the Muslim’s holy month of Ramadan in its very own way.

Egyptians have their style of celebrating Ramadan with the Egyptian Fanous (lantern) as well as Kunafa and Qatayef (special Egyptian desserts for Ramadan).

However, since the Egyptian revolution in January 2011, the Egyptian economy has been facing many difficulties that have resulted in burdens upon the Egyptian people, such as the increasing prices of virtually everything, both products and services.

The prices of the traditional products that Egyptians use to celebrate Ramadan have also increased in a way that has made the poorest and middle class segments decide to stop using them or to find alternatives.

Daily News Egypt gathered the prices of Egyptian products that are used during Ramadan.

Egyptians think of food as a main thing to celebrate with, and that’s why every feast has its own type of food that Egyptians prefer to eat, such as lamb meat in the “Fattah” meal—a dish consisting of pita bread, rice, broth, and sauce—eaten during the Eid Al-Adha (Celebration of the Sacrifice) holiday, the Egyptian fermented fish “Fesikh and Ringa,” popular for the Spring feast, and the Egyptian sugar-covered cookies called “Kahk”.

Ramadan for Egyptians has its own food and drinks, as well as the traditional Egyptian lantern.

Kunafa is a main dessert for Egyptians during Ramadan, consisting of wheat flour, coconut, honey, and nuts.

Its history dates back to the year 1250 A.D., when the Mamelukes were ruling Egypt, but others believe that it was invented earlier in Levant countries.

However, the simple, cheap dessert has witnessed an increase in its price, especially due to imported nuts, as well as wheat flour.

Almost 5 years ago, Egyptian confectioners decided to change the old style Kunafa and began using other ingredients, such as mango and Nutella chocolate.

The prices of prepared Kunafa cakes range between EGP120 and EGP 280 at fancy confectioners, depending on the stuffings and toppings.

At regular, local confectioners, a kilogramme of prepared Kunafa is around EGP 45.

The history of Egyptian Qatayef goes back to 716 A.D., during the Umayyad era.

Qatayef is also a simple cake stuffed with nuts and coconuts and covered with honey.

The price of uncooked Qatayef is around EGP 15 per kilogramme, but it also increased by almost 50% for the same reasons as Kunafa. The high prices of nuts and coconuts represent the same problem. The price of prepared Qatayef at confectioners is around EGP 50 to EGP 92, depending on the stuffing.

Egyptians prefer to start their meal after long hours of fasting with their special drinks, such as “Qamar El-Din” (a special apricot drink with nuts and coconuts), hibiscus, and other drinks.

The history of the Egyptian Fanous lantern goes back to the Fatimid Caliphate, when the Egyptians were the first people to use the Fanous as a special tool to celebrate Ramadan. The kids also like the Fanous lanterns, either for playing or for decoration, as they are often hung in the streets. There are also various small toy lanterns produced specifically for children, which can include features such as playing music.

The prices of Egyptian Fanous lanterns vary based on what are they made of and whether or not they include other features such as lighting or music.

The price of wooden Fanous lanterns start at EGP 65 for the small size, while the bigger ones can reach EGP120. The metal Fanous lanterns range from around EGP 20 to EGP 150 depending on the size.

Small Fanous lanterns, which are usually used as a keychain or a toy recorded a price of EGP 20, and the price of the Fanous lanterns that use candles are around EGP 100.

Additionally, the price of the Fanous fabric ranges from EGP 30 to EGP 150, depending on the type of fabric and the size.

The price of Fanous lanterns made of glass, which are usually used to decorate the streets, starts at EGP 120.

People are not happy, boycotting products

People are likely to boycott the non-necessary products due to their high prices.

Ahmed Abdel Wahab, an engineer who lives in Giza, said that buying all the cultural products is not important to many people anymore, adding that they used to buy them before the prices increased, while they now mainly focus on the important goods so that they can save money.

He added that they also might buy Fanous lanterns for the kids if they are not overpriced, because children love to play with them.

“We cannot buy this stuff anymore,” says Aliaa Massoud, who is 28 years old.

She added that her family cannot afford to buy all that they used to buy years ago, adding that her mid-class family has more important things to buy, such as food and clothes for the Eid Al-Fitr holiday.

She believes that buying clothes for Eid after Ramadan is more important than buying desserts or food.

On the other hand, Nour El-din, a 25 year old graphic designer, said that the prices are affordable and that he is going to buy the desserts or Fanous lanterns if he wants, adding that celebrating the cultural days for him is as important as paying for food, explaining that “it’s only one month in the year.”

Moreover, Ghada Ali, a mother of four children, said that she cannot spend her money on unimportant things such as Fanous lanterns; however, she added that making Kunafa, Qatayef, and other desserts is important because she invites her family and friends for feasting, and she should provide them “something sweet after.”

She added, however, that buying desserts is not an option, because they are overpriced at the confectioners and also because she prefers to make them at her home.

EGP 14 increase on ration cards per citizen in Ramadan