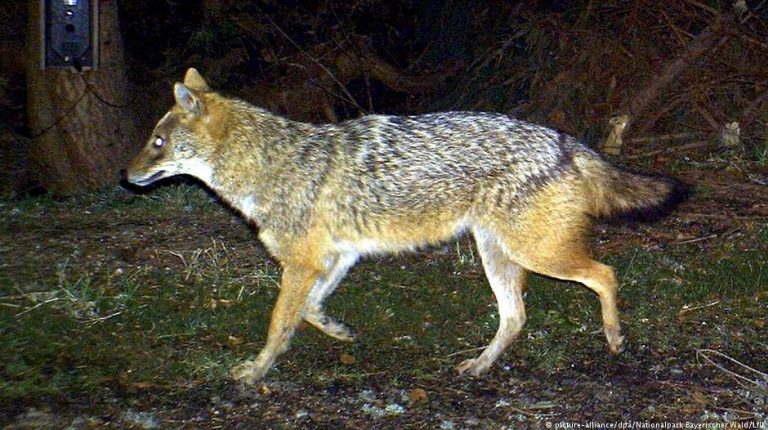 Golden jackals, similar to small grey wolves, have been making their way across Europe into new territory. A German farmer is claiming compensation after the protected, wolf-like predator killed a sheep.For the first time, golden jackals have been detected in the northern German state of Schleswig-Holstein, which borders Denmark, authorities announced this week. The animals are originally native to the Balkans, but have slowly spread to areas they never previously settled, such as northern Italy, eastern Austria and Hungary.

After three sheep were attacked by an animal in the region of Dithmarschen on the North Sea coast this month, authorities first suspected a wolf. A DNA sample, however, revealed the culprit to be a golden jackal (Canis aureus), the state ministry for the environment announced.

The predators are smaller and more slender than gray wolves and normally weigh 8 to 10 kilograms (17 to 22 pounds), while especially large specimens can reach 15 kilograms, according to the ministry. They are protected by German federal regulations.

One of the sheep died following the incident, meaning the farmer can claim compensation. Authorities pay farmers damages when wolves, which are also protected in Germany, kill their livestock.

Despite the name, golden jackals are believed to be more closely related to gray wolves and coyotes than to the black-backed and side-striped jackal species native to Africa.

Individual specimens have been sporadically detected in Switzerland and Germany over the past few years, the ministry said. In the summer of 2000, evidence of their presence was first discovered in a southern part of Brandenburg state. Specimens popped up in Bavaria in 2012, in Hessen in 2013 and in Mecklenburg-Vorpommern and Lower Saxony in 2016, gradually moving north.

Europe’s northernmost population of golden jackals is in Denmark. The ministry said it could not accurately determine if the latest findings were evidence of Danish jackals colonizing Schleswig-Holstein.

The animals usually live in pairs and occupy fixed territories of about 3 square kilometers (1 square mile).

They tend to feed on insects, rodents, birds and amphibians but can also eat smaller mammals such as hares and rabbits, rare deer, and their offspring.

This week in southern Germany a golden jackal was struck on the highway near Freising, which is close to Munich airport.