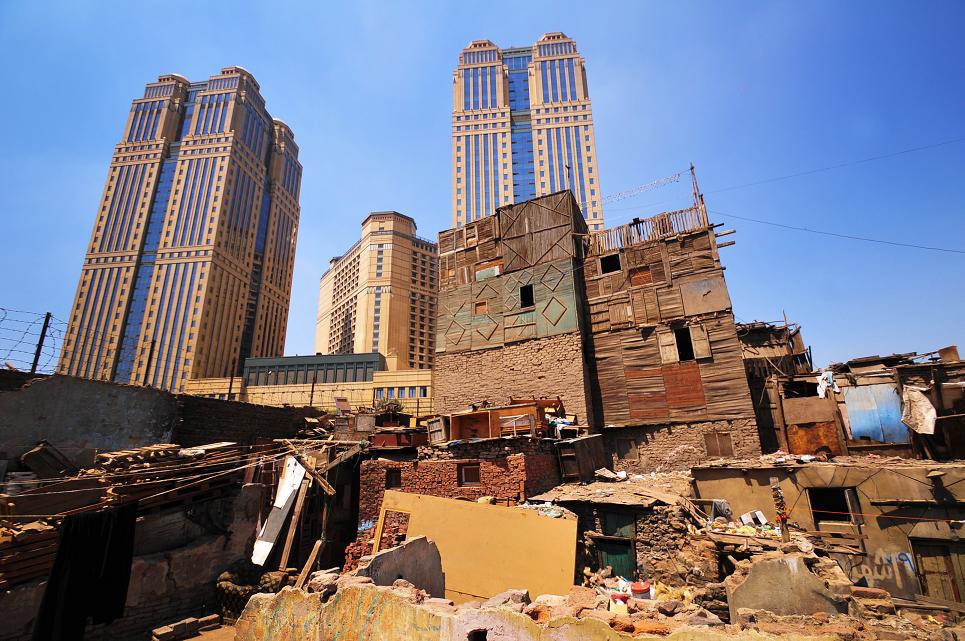 In Downtown Cairo, one area has been on the government’s agenda for the past 30 years, where they have tried to find solutions to develop the area that would be satisfactory enough to its residents. The area lies in a strategic location behind Egypt’s state owned media hub, Maspero, parallel to the famous local neighborhood of Boulaq, and is comprised of alleyways, small rooms, and wrecked houses.

One reason the area famous as “Maspero Triangle” was on the government’s agenda was that several foreign investors were reportedly interested in transforming it—the reason why residents have always rejected leaving.

During the past 30 years, the government tried several means of moving Maspero Triangle residents out of the area, but their solutions never came to reality due to several factors, whether the dissatisfaction of residents or change occurring inside the government.

However, earlier in 2017, the Ministry of Housing and Urban Development handed out to the residents forms to fill in, in which they had to pick one of five ‘alternatives’ for the status quo.

The five alternatives revolved around three main principles: either move out and let the government decide where, receive compensation and leave, or stay in the triangle under the condition of paying rent after reconstruction is conducted.

In one corner between the worn out houses, one woman in her fifties hides behind her small sandwich kiosk, which she counts on as her only source of income.

The area of Maspero Triangle has not looked the same to her all the time, Sabra Mahmoud recalls, as she was born and raised, got married, and gave birth to her children in this very place.

“We [her family] have been here since these houses were only made of straw,” she said. However, Sabra’s family finally decided to take money and leave, as they chose the third option.

“We did not choose,” she said, arguing that they had no other option to take.

“We could never give up this place; this is our home and our people, but this is not our decision to make,” she explained.

Sabra also questioned the government’s promises of reconstructing the area, adding that “they said that the whole area [Boulaq] would be removed, so we decided to take money and leave, because reconstruction is not guaranteed. If this area is removed, we will be homeless; on the streets.”

Although many Maspero Triangle residents believe that whoever went with the “taking the money” option probably owned other properties outside of the area, Sabra said that she did not and that she was still looking for somewhere else near Maspero Triangle—the area where her and her whole family’s life is.

The option of financial compensation states that, for every room, the resident receives EGP 60,000, in addition to EGP 40,000 in compensation for moving out, according to the Ministry of Housing.

“This time, the talks and decisions are real, because those who asked for other houses are already in the process of moving, and those who asked for money, like us, are promised to receive the checks within the next two weeks. We already started packing our things,” she said.

Next to the wreckage of a house in the “triangle”, the smell of fried onion prevails from a small room, as the Abd Al-Sabour family prepares one of their last meals in the place they have always called home, after they filled out the form, ticking the option of moving to Asmarat.

The Asmarat neighbourhood was inaugurated by President Abdel Fattah Al-Sisi in 2016 to help end slums around Cairo. The neighborhood reportedly has 11,000 units and was established with a budget of EGP 1.5bn.

For the past 44 years, Mohamed Abd Al-Sabour was living in the same room where his mother gave birth to him, although its walls are worn out, they are still decorated with the wedding photo of his parents that dates back to half a century ago.

“We did not choose to leave, but we would be taken out of here anyway,” Mohamed Abd Al-Sabour said.

According to the ministry’s announcement, moving to the Asmarat neighbourhood allows the resident to receive a furnished apartment, for which he pays rent for 30 years, excluding the first year of residence.

However, Abd Al-Sabour believes that moving out is “for the best” for Egypt, adding that “if you want this area for investment purposes, in the interest of Egypt, we would not mind; we would not stand against Egypt’s interests, but you cannot be cruel to the people.”

Abd Al-Sabour also explained that he was skeptical about the other alternatives, particularly the one where residents wait for reconstruction in the triangle.

“We believe that the decision to remove this area will happen. This is the first time for us to think about leaving; [reconstruction] is impossible. We don’t believe that if we leave we will be able to come back,” he said.

Deputy Minister of Housing and Urban Planning Ahmed Adel Darwish said that such concerns were actually valid; however, he assured that the residents were signing contracts with the government, which he considered as enough proof.

Darwish told Daily News Egypt that the residents who have submitted to moving to Asmarat have already started moving, while those who are receiving compensation would receive it during the next two weeks.

Meanwhile, 60 year old Yehya Abdallah, who lives with his sister and her son, ticked another box on the form: Rental in the same area.

Abdallah compares the triangle to the expensive neighbourhood in Cairo, Al-Zamalek, saying, “My whole life is here. If they tell me to move to Zamalek, I’d say to hell with Zamalek! It is nothing compared to here. We all live together here. When someone is ill, we’re there to help. When there is an issue, we solve it together. We’re all a family here,” he said.

Abdallah explained that three years of reconstruction would take place, and meanwhile he will have to stay outside Maspero Triangle.

Although he is afraid that if he leaves he won’t be let back in, he believes that it is the only option that has hope, as if they move to Asmarat, it will be impossible for them to come back, and the option of taking compensation makes him wonder where he could live with only EGP 100,000.

“Ever since we were children, we always heard that the whole Boulaq area would be removed, and every time, nothing happens; however, it is still hard to tell what would happen this time. What we can tell is that this time, some people really want to leave,” he said.

Darwish said that the reconstruction would start by the end of this year, and would take a minimum of three years.

President Abdel Fattah Al-Sisi has put slum development as a priority. Last Tuesday, Minister of Housing and Urban Development Mustafa Madbouly announced during Al-Sisi’s inauguration of national projects that the budget of developing slums would be EGP 15bn.

However, Maspero Triangle residents still have concerns that the government’s intentions to develop the area would not be implemented, just as the previous government’s plans.

Darwish understands the suspicions of residents who view the current initiative as yet another empty promise, explaining: “it is true that development [of the area] has been stopped for 30 or 40 years, but this time, people have already started moving out.”

Meanwhile, residents are still second guessing the entire process, whether they submitted a form to leave or to stay.