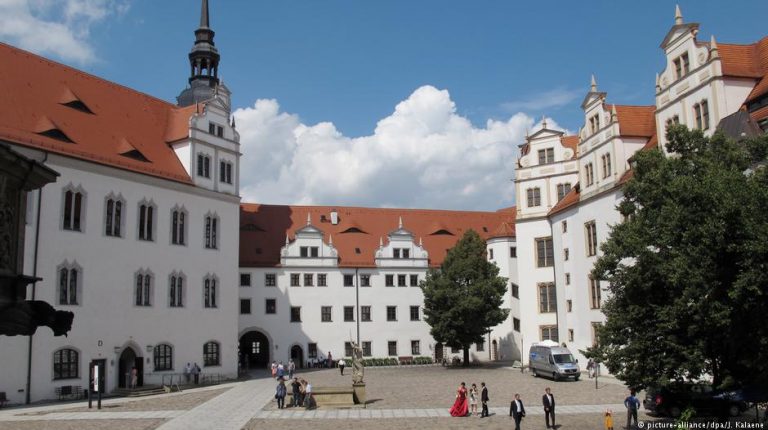 Torgau is a significant location in the history of the Reformation. It became the political hub of Protestant Reformers and it was here that allegiances were formed to defend the new religion.Anyone visiting Torgau will surely go to Hartenfels Castle. The splendid early Renaissance building still proudly towers above the Elbe river. It can be seen for miles, and not merely by the cyclists making use of the popular Elbe bike path.

Several millions of euros have been spent over the past few years to repair and restore the castle complex. Also freshly renovated is the castle chapel, which was consecrated in 1544 by Martin Luther (1483 – 1546) and is regarded as the first-ever newly built Protestant church.

Luther also didn’t detour Hartenfels Castle. It was constructed during the 15th and 16th centuries as a residence for the prince-electorates of Saxony. While Wittenberg, with its university founded in 1502, became the intellectual center during the rule of Frederick III (1463-1525), also known as Frederick the Wise, Torgau established itself as the undisputed center of political power.

“Torgau was where Protestant politics were coordinated,” says Leipzig Church historian Armin Kohnle. A large number of historically significant decisions were made at Hartenfels Castle.

Here, the League of Torgau was formed in 1526. It was the first attempt at a Protestant military alliance. In 1530, negotiations took place here on the foundation of the Smalkaldic League, a defensive alliance of Lutheran princes within the Holy Roman Empire during the mid-16th century.

Luther was known to have visited the town on over 40 occasions. Frederick’s successor Duke Johann the Steadfast (1468-1532) maintained a close and friendly relationship with Luther. The reformer came to Torgau to attend the wedding of Johann’s daughter in 1536.

During that time the castle was transformed into an official seat of power. An architectural masterpiece was the Grosse Wendelstein, also known as “the Impossible Staircase,” a grand, enclosed spiral of stone steps, constructed without a central supporting column, in the castle’s main courtyard.

The permanent exhibition “Torgau – Residence of the Renaissance and Reformation” lets visitors see and appreciate the castle’s role in the architectural and Protestant reformation history. The exhibition is being held with the help and cooperation of the Staatliche Kunstsammlungen Dresden (Dresden State Art Collections).

On the ground floor is where you find the castle chapel, regarded as the first newly-built Protestant church. It was consecrated by Martin Luther in 1544 when he held a sermon that specified how Protestant church services are to be held. No formulas or rituals, but the word of god and the people answering the call was to define Protestant worship.

Apart from Hartenfels Castle, there is much more to discover. Johann’s son and successor Johann Friedrich I (1503-1554) had the Elector’s Chancellery built nearby. It became the main administrative center. Since 2003, the building has housed the cultural history museum of Torgau.

Torgau however was not only a big political base, it was also home to the Reformation culture. The original choirmaster of the Protestant church Johann Walter (1496-1570) was active in St. Mary’s church in Torgau, located only a few steps away from Hartenfels Castle. Together with Luther, he developed a new approach to church services and wrote several hymns. In 1526, Walter founded a town-church choir, which is thought to be the first ever.

An exhibition entitled “Sound and Faith” is dedicated to him. It can be found in the former home of court chaplain and secretary Georg Spalatin (1484-1546), who was referred to as the “Taxman of the Reformation,” based on his good relationship with both Luther and the Prince Elector.

In St. Mary’s church an epitaph remembers Luther’s wife Katharina von Bora (1499-1552). For her, Torgau represented both a beginning and end: it was her first stop when she returned to civic life, after she escaped from the Nimbschen convent as a young nun. Nearly 30 years later, she was also to find her final resting place in Torgau.

While fleeing the Black Plague in Wittenberg in September 1552, Katharina was involved in an accident just outside Torgau. Luther’s widow was so badly injured by the fall that she never recovered.

She died on December 20 in the Katharina-Luther-Stube, which is now open to the public, and was buried in St. Mary’s church.

Torgau carefully preserves the memory of Katharina, including a big annual festival in her honor in the summer. This year it takes place on June 24. The event was created as part of the “Luther Decade” and will be taking place for the eighth time in 2017.