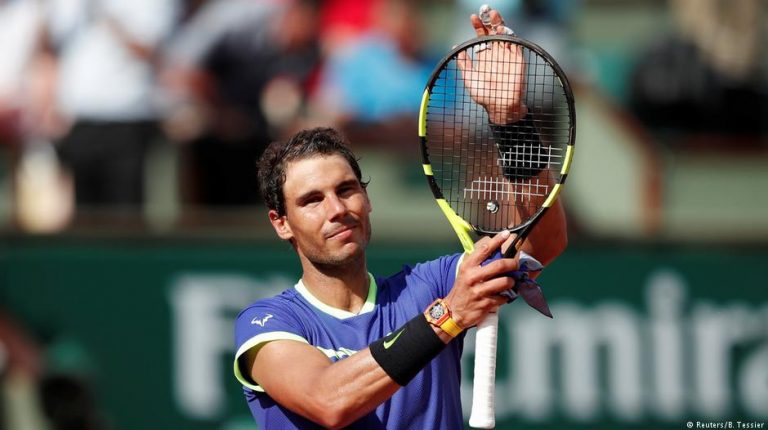 French Open master Rafael Nadal and defending champion Novak Djokovic both sailed in to round 3 with straight sets wins on Wednesday. But things weren’t quite so straightforward for women’s champion Garbine Muguruza.Rafael Nadal remained on course for a 10th French open title with a regulation 6-1, 6-4, 6-3 victory over Robin Haase in the French afternoon sunshine. The fourth-seeded Spaniard secured the win on Court Philippe Chatrier, where he had won his previous nine titles.

“It was really hard for me last year,” Nadal, who had to withdraw because of an injury in 2016, said. “I’m very happy to be back on this court, which is probably the most important in my career.”

Despite being outclassed, Haase was able to see the funny side: “At the beginning I was way better,” the Dutchman said. “Then the warm-up ended.”

There were also wins on Wednesday for Canada’s Milos Raonic, Grigor Dimitrov of Bulgaria and Austrian 6th seed Dominic Thiem.

The reigning female champion Garbine Muguruza was made to work a little harder for her progress to the round of 32. The Spaniard lost the opening set against the 53rd-ranked Estonian Anett Kontaveit but held on to win 6-7 (4), 6-4, 6-2.

Perennial grand slam contender Serena Williams is not playing at the French Open as she’s pregnant but the 23-time singles Grand Slam champion was in attendance on Wednesday to cheer on her older sister Venus. The 36-year-old got off to a sluggish start but quickly found her range to beat Kurumi Nara of Japan 6-3, 6-1 and reach the third round.

There was a shock elsewhere in the women’s draw as American teenager CiCi Bellis progressed in her French Open debut, upsetting 18th-seeded Kiki Bertens of the Netherlands 6-3, 7-6 (5).