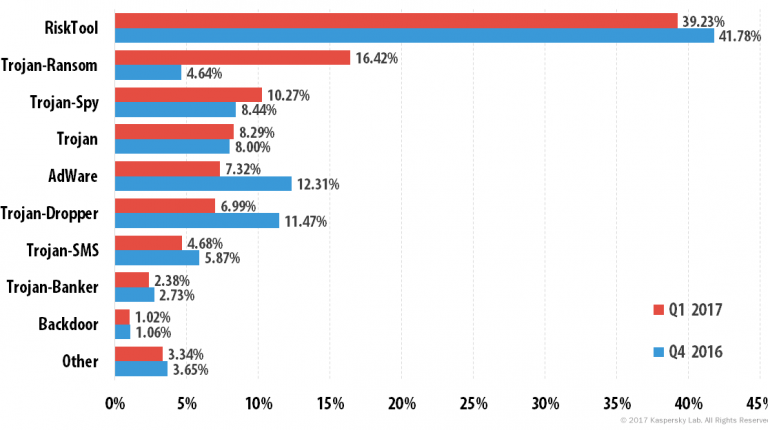 The global nightmare of ransomware shows no sign of slowing down, with the volume of mobile ransomware rising more than three-fold (3.5 times) during the first few months of the year, according to Kaspersky Lab’s Malware Report for the first quarter (Q1) of 2017. The number of mobile ransomware files detected reached 218,625 during the quarter, compared to 61,832 in the previous quarter, with the Congur family accounting for more than 86%.  Ransomware targeting all devices, systems, and networks also continued to grow, with 11 new cryptor families and 55,679 new modifications making their appearance in Q1.

Congur ransomware is primarily a blocker, setting or resetting the device’s PIN (passcode) so that the attackers have administrator rights on the device.

The USA became the country hardest hit by mobile ransomware in Q1, with Svpeng ransomware the most widespread threat.

In all, 55,679 new Windows ransomware modifications were detected during the quarter, representing a near two-fold increase from Q4 2016 (29,450). Most of these new modifications belonged to the Cerber family.

Kaspersky Lab solutions detected and repelled 479,528,279 malicious attacks from online resources located in 190 countries all over the world. Exactly 79,209,775 unique URLs were recognised as malicious by web antivirus components. Attempted infections by malware that aims to steal money via online access to bank accounts were registered on 288,000 user computers.