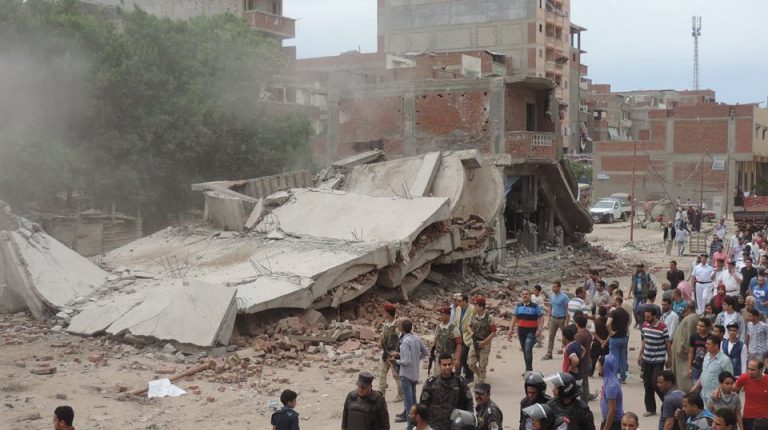 Thousands of unlicensed buildings have been removed since President Abdel Fattah Al-Sisi proclaimed the beginning of “The People’s Right” campaign to retrieve state property and eradicate all encroachments in all governorates. The armed forces joined the campaign alongside security forces.

On Sunday, Egypt’s Prime Minister, Sherif Ismail, held a meeting with the governors to follow the developments regarding the removal of all encroachments on state property and to legalise the situation of violations.

The meeting discussed a proposal of creating databases for the state’s lands, depending on a geographic information system (GIS) in order to observe the changes, encroachments, and illegal buildings. By depending on technology, the state will be able to verify accurate data about encroachments and use the data to combat corruption.

Minister of Agriculture Abdel Moneim Al-Banna assigned the General Authority for Fish Resources Development (GAFRD) to coordinate with the ministries of interior and environment to remove any encroachments at lakes.

The GAFRD said that it has recorded 4,656 incidents of encroachments of state property in the northern lakes in 2015 and 2016. The total number of encroachments at Al-Manzala, Borollos, Idku, and Mariout lakes reached 64,000 on a total area of 17 feddans, according to an official report issued by the GAFRD.

The authority, which is affiliated to the Ministry of Agriculture, announced that the encroachments were located in the governorates of Damietta, Port Said, Daqahleya, Kafr Al-Sheikh, Al-Beheira, and Alexandria.

According to the report, the main sources of contamination in the lakes are sewage, agricultural runoffs, and industrial wastewaters.

Chief of the GAFRD Khaled Al-Husseiny believes that not removing encroachments was a result of the security situation. This has now changed after the presidential declaration to remove encroachments.

On 17 May, Ibrahim Mehleb, the president’s assistant for national projects and former prime minister, met with Minister of Defence Sedki Sobhi and with the ministers of interior, agriculture, and local development, as well as with the president of the Administrative Control Authority (ACA), to discuss the procedures of handling encroachments on state lands and ending illegal land acquisition.

The meeting discussed implementing Al-Sisi’s orders to devise a plan to count and remove all encroachments and the cooperation between the executive authorities and security directorates by the end of June.

Remarks from the governors were reviewed during the meeting as well as the procedures regarding how to prevent the return of such encroachments.

Mohammed Mahdi, owner of one of the demolished buildings in Daqahleya, told Daily News Egypt that although he has a licence for the building, the local administrative demolished and completely removed the building; Mahdi, however, refused to show reporters his licence, claiming that he is afraid of facing problems with the governorate.

Governor of Cairo Atef Abdel-Hameed said that local authorities coordinate with the Ministry of Interior before demolishing encroachments and that a committee of local officials was formed to assure and review the measurements of removing.

In Sharm El-Sheikh, Sandra Redshaw, a Dutch citizen who used to own a building in Sharm, claimed the local authorities destroyed her building. She added that she had bought the land from the Bedouin several years ago, but the government did not acknowledge buying land with this approach, so they took back the land.

She told Daily News Egypt that the South Sinai governorate gave her two options: take a different piece of land in the area or to take an apartment in Sharm El-Sheikh. She has not yet decided which of the decisions would be more convenient for her.

In Daqahleya governorate, the local authorities removed more than 598 square kilometres and 10,000 feddans in Al-Manzala Lake, according to the governor, Ahmed Al-Shaarawy.

Radi El-Halwagy, one of those whose house has been destroyed by the government, said that the demolition does not harm him so much, on the contrary it will help him legalise his position.

Urban planning and local administration expert Haytham Shawky welcomed the idea of using the GIS system in observing the encroachments. He believes that it will facilitate the procedures of counting and replanning the area.

Shawky said that the GIS needs highly qualified and trained professionals to be able to use the technique or geographers and surveyors from the private sector.

Lawyer Alaa El-Basiouny explained that some people who already have buildings with no licences sometimes predict that there are orders of removal, so they bribe people from the local administration so that only one wall or a fence would be removed instead of the whole building. After that, the government considers this a resolution, and the land therefore becomes legal after paying a fine.

If the state really wants to prevent illegal buildings, it has to offer alternatives for people, especially in the countryside, where there is an overpopulation and lack of land to build on other than cultivated lands, El-Basiouny added.

According to an official statement, the committee, assigned to retrieve the state’s land, had received 17,000 requests for legalising land plots, stating that the committee retrieved nearly 70,000 feddans of cultivated lands and 7,000 feddans for the authority of the new cities, in addition to removing encroachments at the Nile and road buffers.

The meeting stressed on the state’s efforts to consider social aspects, as well as facilities for serious investors and small farmers to legalise their positions.

In his speech during the inauguration of several projects in the governorate of Qena, Al-Sisi urged the police and the military to end illegal land acquisition. The president criticised the performance of the government, urging it to improve and forcefully settle the legal status of land taken by force from the state.