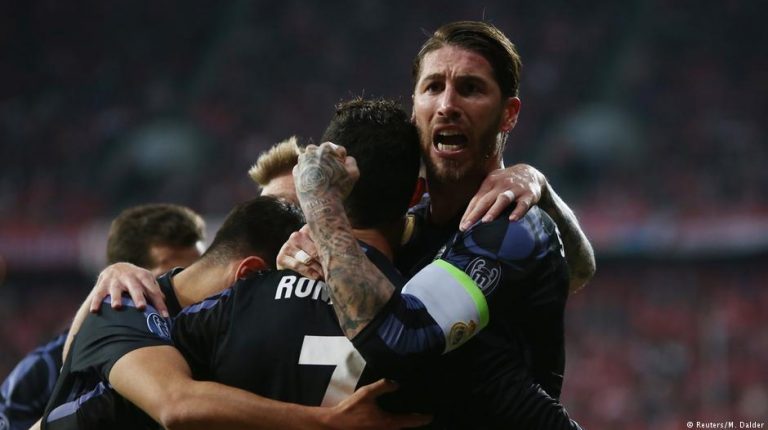 Real Madrid are motivated by the chance to be the first club to win back-to-back titles. Juventus are aiming for their first European treble. No matter who ends up lifting the trophy in Cardiff, history will be made.AC Milan. Ajax. Juventus. Manchester United. Those are all the teams who have been a game away from winning back-to-back Champions League titles since the tournament was renamed in 1992.

Each of those illustrious clubs fell at the final hurdle. Now the challenge is Real Madrid’s as they take on Juventus in this year’s Champions League final in Cardiff on Saturday.

“We have to defend our title and we have that motivational extra of being the first team in history to win it twice in a row,” said Real captain Sergio Ramos (pictured above, right). “As captain it would be a dream come true and I could almost die in peace, hopefully we can bring that cup home with us.”

Manchester United was the last team to come close to defending their title, but lost to Barcelona in the 2009 final. Cristiano Ronaldo was part of that United team, but moved to Real Madrid the following season.

This season he has scored 10 goals in the Champions League, taking his career tally in that competition to 103. His 25 goals in La Liga this term helped Real to their 33rd Spanish title and on Saturday he hopes to help his club to their second double in four seasons.

“We have the historic opportunity to do the double and on Saturday night we hope to win the Champions League,” Ronaldo said.

A treble for the Old Lady?

Juventus has dominated Italian football over the past six seasons. They have won six straight Serie A titles and the last three Italian cups, including both trophies this season. As they did in 2015, when they lost in the final to Barcelona in Berlin, they have an opportunity to win their first treble. To do so, they must get past the other member of Spain’s big two in Cardiff. The only Italian team to have previously won the treble was Inter in 2009-10, under Jose Mourinho.

A rematch 19 years in the making

Real Madrid have bested Juventus in the Champions League final before. The two faced off in the 1998 Champions showpiece in Amsterdam, and Pedrag Mijatovic scored the only goal of the game in the second half as Real beat the Italians 1-0.

On the losing side? Zinedine Zidane, the current coach of the Galacticos. He later joined Real Madrid from Juventus in 2001 and lifted the Champions League title with the Spanish club in 2003.

The two teams have met 18 times between 1961 and 2015. Each side has won eight games and two others have ended in a draw.

A refereeing opportunity on the lifetime

Felix Brych, a German referee from Munich, will be the one blowing the whistle in the Welsh capital. Though he has refereed a European final before – the 2014 Europa League final between Benfica and Sevilla – this will the first time the 41-year-old referee has officiated a Champions League final.

“It’s an honor to be chosen for the biggest game in European club football, and I’m very much looking forward to it,” Brych said in an interview published on UEFA.com on Friday.