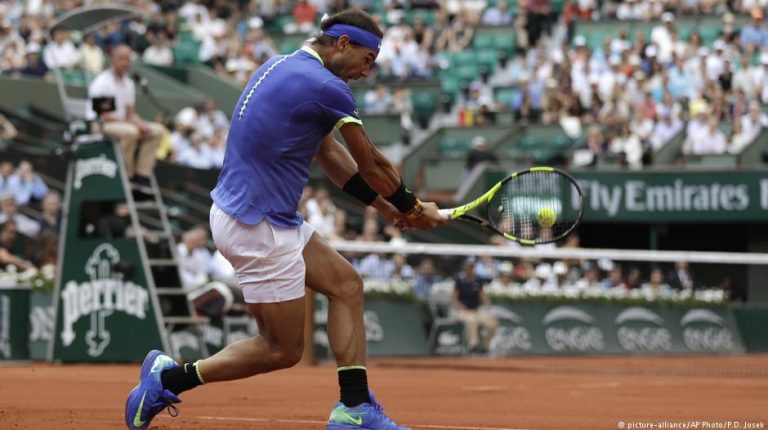 Rafael Nadal laid down a marker as he continued his march to a tenth French Open title with a stunning display against Nikoloz Basilazhvili. But things were less straightforward for Novak Djokovic, who needed five sets.Nine-time French Open champion Rafael Nadal has advanced to the last 16 with a straight-sets victory in the third round. On the women’s side, defending champion Garbine Muguruza also cruised through to the quarterfinals.

Nadal dropped just one game on his way to his straight-sets victory over Nikoloz Basilazhvili, 6-0, 6-1, 6-0 on Friday. This was the 100th best-of-five-sets match on clay for the Spaniard, who took his record on the surface to 98 and two.

“I don’t know if it was perfection,” said the Spaniard, who turns 31 on Saturday. “I went on court thinking it was going to be a tough match … I believe I played the best match since a while.”

The No. 4 seed is to face fellow Spaniard Roberto Bautista Agut, (17) in the quarterfinals, as he continues his bid for “La Decima” – his 10th French Open title.

He’s still on course to meet defending champion Novak Djokovic in the semifinals after the Serbian came back from two sets to one down to win a five set thriller against Argentina’s Diego Schwartzman 5-7, 6-3, 6-3, 6-1, 6-1.

“I expected a tough match, there were lots of exchanges from the baseline and the conditions were heavy,” said Djokovic. “I congratulate Diego on a great battle. He played very, very well.”

Fifth-seeded Milos Raonic of Canada also advanced to the fourth round when his opponent, Spain’s Guillermo Garcia-Lopez, retired from the match with a left thigh injury. Raonic was leading 6-1, 1-0 when Garcia-Lopez was forced to condede. This was the second retirement of the day after Belgian David Goffin was forced out with an injured right ankle.

No shocks in the women’s draw

Muguruza spoke afterwards of how baking helps her to relax away from the court: “I know in Wimbledon I will go to the same house. I know the kitchen, and I know that the owner, the woman loves to bake, so I have everything I need for muffin, cakes, and stuff,” she said.