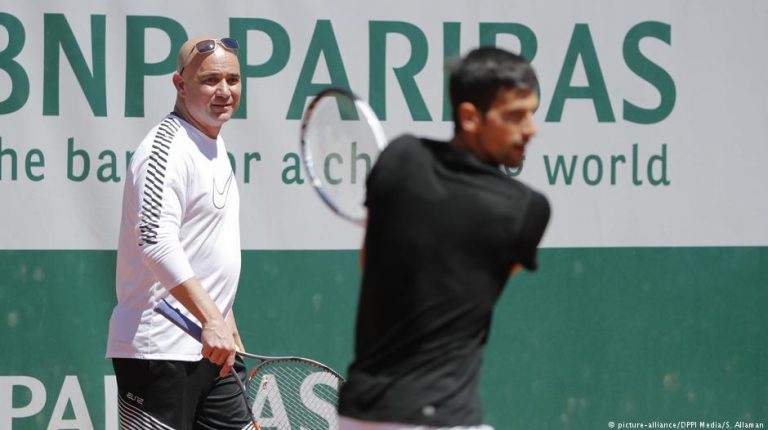 Andre Agassi, Ivan Lendl and Toni Nadal: Perhaps the coaches are the most interesting stories a this year’s French Open. However, it’s unclear how much of a shelf life any of them will have.Roger is not there, neiher is Serena. Well actually she is, but she is pregnant, so she is in the stands watching her sister Venus’ games. The presence of Federer and Williams is being missed at Roland Garros this year. Maria Sharapova wasn’t granted a wild card after her doping ban and Angelique Kerber fell in the first round. So so-called “big stories” are at a premium.

The coaches are the stars

On the men’s side, all everybody wants to know is whether the “king of clay,” Rafael Nadal, will come up against the title holder, Novak Djokovic (pictured above, right) in the semifinals. Nadal vs. Djokovic. Should this come to fruition, a couple of even older men would come into the focus of the media, for the men behind the stars are the secret attraction of this Grand Slam.

Toni Nadal, who as a was part of the reason that Rafael once got to the top of the men’s rankings, is planning to withdraw completely from his nephew’s team by 2018 at the latest, in view of the influence of his younger counterpart, Carlos Moya.

On the other hand – there is one of the most interesting hirings in the tennis-coaching business in years, when Andre Agassi (above, left) agreed to join Novak Djokovic’s team – although the extent of his role is not yet clear. The Serbian parted company with former coach Boris Becker last year and, just before he headed to Paris, he dismissed the rest of his coaching. Only Pepe Imaz, who has been described as a “guru” by his detractors, due to his focus on body and soul, is left from the old team.

However, now Agassi is the most prominent man in the stands surrounding the Philippe-Chatrier court and he seems not to be worried about the on-court success of Djokovic. Sometimes his rests his sunglasses on his bald head, sometimes they are on his nose.

Happened to be in town

After Djokovic’s first-round match, Agassi clapped – exactly four times. This would be all the visible emotion that he would display. Is this the return of Agassi to the professional tennis tour? This is not clear, as both sides have declared this to be a trial. The 47-year-old American has said that he had already planned to be in town anyway, long before getting the call from the 30-year-old Serbian. Agassi and his German wife, Steffi Graf, happened to have an advertising contract with the official timekeeper of the French Open.

This is the first time that this exceptional former player has gotten involved with an exceptional current player. Agassi’s predecessor at Djokovic’s side, Boris Becker, was so fascinated by the news that he was waiting for Agassi in the the Serbian’s team box.

And with regard to the weakness in form of Angelique Kerber, Becker has tirelessly suggested that either he or Graf should come to the rescue. Either one, Becker has suggested, could act as something of a “super coach” for Kerber, who had spoken with Graf often, and even occasionally trained with her at her Las Vegas home. One can hardly imagine the introverted Graf returning to the professional tour, which has become much more of a circus than it used to be. Still, the German fans would love to see Steffi and Angie united in some way.

This would definitely make for a big story – just as the hiring of Stefan Edberg by Federer was a few years ago. But this example also shows how complicated these star pairings can be. Edberg, a star himself in his home country of Sweden, doesn’t enjoy being on the road. Federer also seems to have come to the conclusion that his current coach, Ivan Ljubicic, is probably the right man for the final phase of his active career.

Ivan Lendl doesn’t seem to like traveling much either, but he did make his way to Paris with Andy Murray anyway. Lendl and does what he always does: Through his sunglasses he quietly observes his student, who in Paris has looked as if he is auditioning for the role of “moaning Myrtle,” a character from the Harry Potter series of children’s books.

Things can be even harder on the tour for coaches who don’t happen to have a big name, and they tend to have a very short lifespan, particularly on the women’s side. Sven Groeneveld, who has been Maria Sharapova’s coach since 2013, is one exception to this rule.

Apart from him, coaches tend to fall into a couple of categories. There are fathers, such as Piotr Wozniacki or Alexander Zverev senior, and longtimefriends, like Kerber’s coach, Torben Beltz. Then there are coaches who are well-known because they have established their own academies, such as Serena Williams’ coach, Patrick Mouratoglou. On the men’s side, Magnus Norman has made a name for himself by helping Stan Wawrinka, the winner of the 2015 French Open, establish himself in the top 10.

Then there are the short-term coaches, like John McEnroe, who was hired for a limited period by Milos Raonic, before he was let go just before the US Open . Mats Wilander spent a very short time as coach of Madison Keys. Players tend to hire such names more in a quest for improvement in the mental side of their game than in physical technique. In the case of Wilander and Keys, the trial lasted only a week. Now Wilander is back in front of the cameras at pan-European broadcaster Eurosport – along with Boris Becker, at least for now.