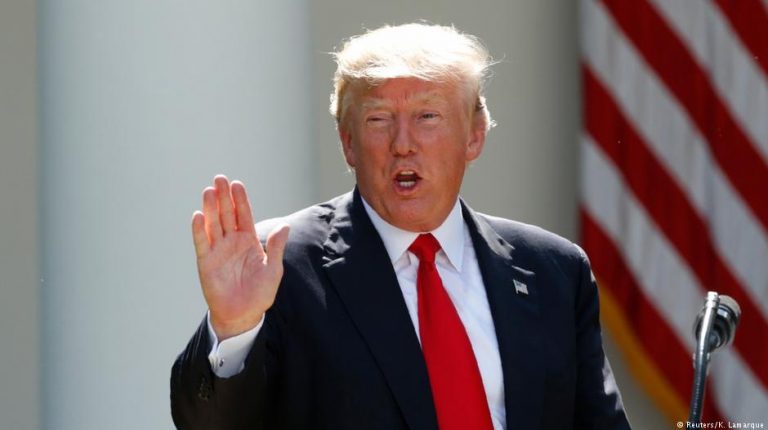 This week in pictures: the US says so long to the Paris Agreement, the EU looks to China on climate issues, pythons on the loose in Florida and threats to the Brazilian rainforest.US President Donald Trump waved goodbye to the Paris Climate Agreement on Thursday, garnering international condemnation. Trump said the deal was too costly for the US, and that he would immediately “cease all implementation of the non-binding Paris Accord and the draconian financial and economic burdens the agreement imposes on our country.” The US President said he was willing to negotiate a deal that would be better for America.

With the US President Donald Trump’s decision to withdraw from the Paris Agreement, the European Union is looking to China for leadership on climate change. This week, German Chancellor Angela Merkel and Chinese Premier Li Keqiang met in Beijing to discuss trade and climate issues. At a bilateral EU summit in Brussels on Thursday, the EU and China also reaffirmed their joint commitment to the accord. After years of pushing back against emissions targets, it appears China has now assumed the mantle of global green leadership. What do you do when a ravenous invasive species multiplies, killing local wildlife? In Florida, they’ve called in a crack team of concerned citizens to defend the American wilderness. The enemy is the Burmese python. The reptile’s numbers exploded in the Everglades in the late 1990s after some are thought to have escaped from the pet trade. They’ve thrived in the subtropical climate where they feast on everything from raccoons and rabbits to adult deer. But with so many snakes on the loose, can the team of mainly ex-military combat the problem in a humane way?

The world’s coral reefs can’t be restored to their former glory, so the focus should be on protecting them from further destruction, scientists said this week. Overfishing, pollution, and global warming are all impacting reefs. Mass coral bleaching across the world is accelerating. Around 30 percent of Australia’s Great Barrier Reef was lost in 2016 and recent findings show coral could be largely extinct by 2050. But what can we do to save them? Sexual healing could be the answer thanks to a discovery related to building up reefs through reproduction. The picture shows coral spawning.

Brazil’s rainforests have been dealt a blow. The country’s senate approved a proposal to remove nearly 600,000 hectares of forest from three protected areas in the Amazon and Mata Atlântica. The country’s President Michel Temer has yet to ratify the proposal but environmentalists are urging him to veto it, saying it would encroach on local land rights and worsen climate change. However, those backing the proposal say the beleaguered economy needs more land for farming, mining and other industries to create jobs and boost growth.