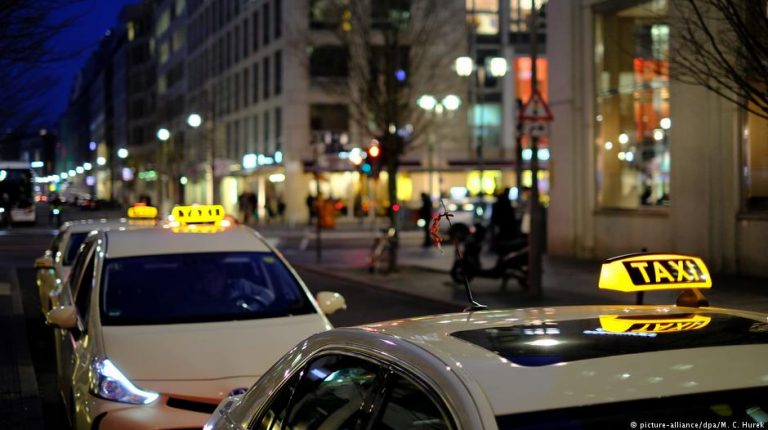 Berlin is a world city – say the Berliners. No way, says DW’s columnist Gero Schliess. When it comes to cash, Berlin still lives in the Stone Age – and the best arguments won’t convince it otherwise.”Singing in the Rain” is a wonderful musical set in Paris. But I never thought that I’d be performing the legendary dance in the rain. And in Berlin. The routine wasn’t quite so carefree as the original. The flirt factor was also limited. Unlike the hero of the musical, Gene Kelly, I wasn’t looking to win a beautiful woman. A taxi driver would have sufficed.

No money, no fun

That’s how my misery began. That night, the rain was as violent as the downpour Gene had endured in Paris when I rushed out of an event and opened the door of a waiting taxi. I was soon hugely disappointed. I had just arranged my clammy clothes when the taxi driver said, rather casually in his Berlin slang, that I could not pay by card. Damn.

Without using unnecessary force to suppress my cursing, I removed myself from the taxi in my damp gear and stood in the rain – in the truest sense of the word. Onto the next taxi, I said encouragingly to myself. But this time I was forewarned and asked before entering.

I got the same response. And even more wetness – curses included. It was only in the third taxi that I found someone who had overcome their deep aversion to modern means of payment.

In 2015, the local Berlin taxi company issued a solemn vow to accept cards in every taxi. I have already found that amusing – see above. Even the taxi driver with whom I was finally able to travel complained to me about the “compulsory cards,” as he called them. A kind of Robin Hood of the Berlin taxi profession, he sees the evil forces of redistribution at work and opposes the cashless money flow with all his power.

Also in Berghain: Cash only

The denial of civilization in Berlin has often caught me on the wrong foot. In Washington, where I lived and worked as a correspondent, the taxis are not so safe and well cared for. Yet every rust-heap that calls itself a “cab” has a functioning card reading device.

Travel warning to all Berlin tourists or those planning a visit: who travels without cash in Berlin is lost. And not only in taxis.

Berlin defines its world metropolis status rather capriciously. One of its private institutions, Steinbeis University, has even calculated that cash really costs money. Retailers in Germany spend around 5.7 billion euros annually to handle cash and take it to the bank. 5.7 billion euros! What are the ridiculous charges for using a credit card?

Every year, individuals have to pay 150 euros ($168) for their banknote and coin fetish. That money won’t be available for other necessary investments. For example: how many vodka shots could Berliners enjoy for 150 euros?

Of course, this isn’t all meant to be serious. But why doesn’t the prospect of foregoing such a high percentage of happiness, which is so popular in this city, have an effect, I wonder? The reason can only be past traumatic experiences.

Let’s poke around in the past. Is the problem the loss of the GDR mark in 1990? After all, the West German Mark compensated our East German brothers and sisters when it was exchanged for the easy socialist money at the ratio of 1:1. But before that, hyperinflation and currency reform were already anchored in the German DNA. The trauma then adds up. The fear of loss is high. And so there is no therapy in sight. Or good prospects for the EC card in Berlin.

Do we want to accept this? No! Let us make another attempt. If economics and hedonism don’t work as arguments, perhaps health care will.

A German euro bill changes hands an average of around 150 times before reaching the owner. So Berlin, decide! Cashless money flow or paper-wet bacteria flow?

Banknote issuance to GDP increases to 12.68% in February: CBE