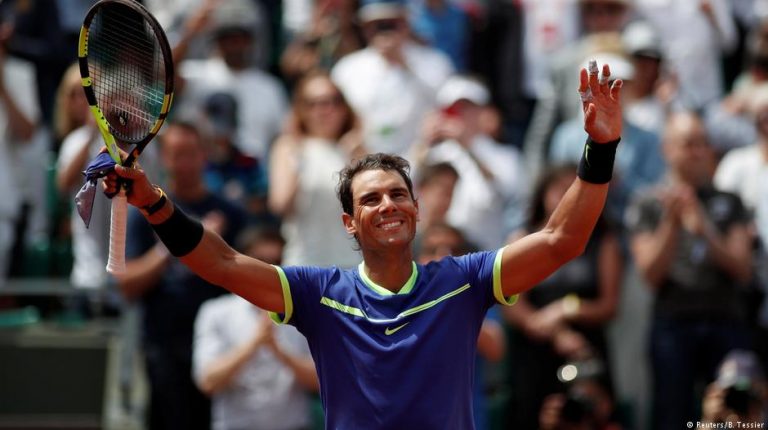 Rafael Nadal’s blistering form continued as he beat Roberto Bautista Agut in straight sets. Defeats for Garbine Muguruza and Venus Williams mean there will be a first time Grand Slam champion in the women’s draw.Rafael Nadal continued his near-flawless form in his favorite tournament as he blitzed compatriot Roberto Bautista Agut 6-1 6-2 6-2 in the fourth round on Sunday.

The win means Nadal has dropped just 20 games and not a single set in his four matches in the tournament to date and leaves him on course for a tenth title.

“I’m happy because Roberto is a very good player. It’s very important for me to be in the quarterfinals one more time,” said Nadal, who turned 31 on Saturday. “Probably I didn’t play as well as I did the other day, but I still played well.”

Despite 16 double faults, Kristina Mladenovic ended defending champion Garbine Muguruza’s hopes of back-to-back titles with a 6-1 3-6 6-3, win that sent the home favorite in to the quarterfinals.

After a nervy opening set, Spanish fourth seed Muguruza rallied but 13th-seeded Frenchwoman Mladenovic made her shots when it mattered to set up a meeting with Timea Bascinszky, who beat Venus Williams.

“Everything wasn’t perfect. There were a few concerns,” Mladenovic said, before joking: “I made about 35 double-faults today, but everything’s [okay]!”

Williams’ chances of adding a first French Open title to her collection of seven grand slams faded after the 36-year-old was beaten 5-7 6-2 6-1 by Bascinszky.

Williams, seeded 10th and competing in her 20th French Open, fought back from 5-1 down rattling off six straight games to win the first set.

But she ran out of steam as the 27-year-old Bacsinszky, who had wasted two set points in the first set, chased her across the court and won the next two with ease, clinching the match with a perfect drop shot.