Egypt is the second largest producer of natural gas in Africa after Algeria, yet Egypt’s power generation infrastructure is dependent on natural gas. More than 75% of the electricity generated in Egypt comes from natural gas plants. Egypt currently produces about 3.9bn cubic feet of gas per day and imports another 1-1.1bn cubic feet per day with an estimated cost of $300mn per month, in order to meet the growing needs of the electricity sector.

The country does have multiple areas of undeveloped reserves, which had not been able to afford their development, as the Egyptian government  had not offered high enough prices to foreign firms capable of developing the reserves. That changed lately with the new Mediterranean discoveries. 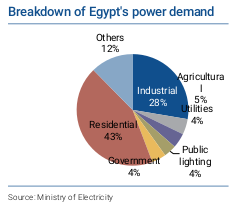 Although Egypt is a hydrocarbon rich country, it faces numerous energy challenges. Ensuring reliable, affordable, and sustainable energy is still a major challenge for the Egyptian state, especially after the country’s shift in recent years from being an exporter of natural gas to an importer.

In the period between 1995 and 2010, Egypt’s proven reserves more than tripled from 22.8tn cubic feet (TCF) to 78 TCF. Since 2010, the remaining reserves have declined, until the recent exploration of Zohr field, which has an estimated reserve of 30 TCF.

Egypt’s supply and demand balance followed a similar path. The production rate started to increase in 1999. While 2004 marked only a slight increase in production, it was the first time in years where the amount of produced gas was greater than the amount of consumed gas. This triggered a turning point in 2005, as production increased by around 28% compared to 2004, and peaked in 2009, followed by a drop in 2013.

On the other hand, energy consumption increased in the first decade of the 21st century, and gas demand grew by almost 9%. Gas became the main source for Egypt’s energy needs, reaching 50% of the total energy supply, compared to 35% in 2000.

However, since 2011, production and reserves have been on a consistent downtrend. This was driven by International Oil Companies (IOCs) reducing exploration capital expenditures (capex) following the Petroleum Ministry’s inability to settle its dues, which meant that natural depletion of resources was not being offset. Government dues to IOCs peaked at USD6.4bn in FY11/12, rising from  $1.3bn in FY2009/10, as FX reserves dwindled.

However, the government repaid $3bn of dues over 2012-16 period, bringing it to USD3.5bn as of December 2016. In March, the government promised to pay 50% of IOCs dues within weeks, but there has been no update since then, CI capital forecast that full repayment will take place after receiving the second tranche of the International Monetary Fund (IMF) loan in June. 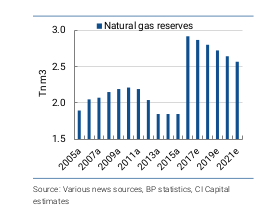 The demand for natural gas is expected to grow, especially after Siemens signed an €8bn deal with the Egyptian government to establish three high-efficiency natural gas power plants at a capacity of 14.4GW. Regarding the residential sector, Egypt has secured a $1.5bn project to connect 1.5 million households to natural gas.

Despite Egypt terminating a host of export deals to redirect gas supply to the domestic market, the gas shortage became acute enough to trigger nationwide power outages and shut-downs in a number of energy-intensive industries.

Egypt’s Ministry of Petroleum forecasts a drop of gas production by 3.6% to 4.85 billion cubic feet per day (bcf/day) in FY 2017/2018, compared to 5.03 bcf/day in FY 2014/2015. This is expected to lead to curtailed production at factories. The Egyptian Natural Gas Holding Company (EGAS) announced in June that the natural gas supplied will be diverted away from industrial plants in August to accommodate for the increased demand from the electric power plants.

The shortage was partially resolved in April 2015, when Egypt resorted to natural gas imports to fill the gap via Liquefied Natural Gas (LNG) and Floating Storage and Regasification Units (FSRUs) installed in April 2015  and September 2015. We estimate Egypt’s natural gas imports to have reached 8.0bn cubic meters (0.8bcf/d) in 2016 and 8.4bn cubic meters (0.8bcf/d) in 2017. Which makes up around 18.6% of domestic gas needs according to CI Capital estimates, but they believe the supply gap is actually higher (at 27.5% of domestic demand) if high heavy fuel oil usage at power plants is replaced with gas. Plans to install a third Floating Storage Regasification Unit (FSRU) were put on hold in December16, in anticipation of improved supply from the new fields, starting 2017.

However after the discovery of Zohr gas field-the largest gas field in the Mediterranean Sea-, which EGAS aims that it will produce 900mn cubic feet of gas per day by the end of 2017 , and is estimated to produce 2.7bn cubic feet per day by 2020. will help to serve the Egyptian domestic market demands. 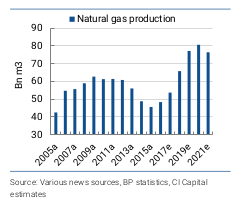 According to CI Capital “Egypt’s Natural gas outlook”, natural gas demand is expected to considerably increase while new field production picks up—with an annual growth rate of 9.4% over the period from 2016 to 2020 to reach 81bn cubic metres (7.8bcf/d). The main driver for this growth is power demand.

CI Capital estimates Egypt’s natural gas imports at 8.4bn cubic metres (0.8bcf/d) in 2017, which will represent around 13.3% of total gas demand, as well as 16% of total annual peak production from the new gas fields. The cost of these imports is $2bn, comprising around 3.6% of Egypt’s total import bill in FY16/17. 2018 is the first full year of production from the largest finds— from the Zohr field and the West Nile Delta project—and  natural gas imports are forecast to fall by 35.4% to reach 5.4bn cubic metres (0.5bcf/d).

As the result of the currency devaluation and economic reform efforts start to bear fruit in mid to late 2017, natural gas needs should increase heavily. According to CI Capital’s report. Egypt’s real GDP is expected to grow by 5%. in FY17/18 and FY18/19, and 4% in FY19/20.

It forecasts that recovering economic growth alongside population growth should drive power consumption to grow at a 6.9% annual growth rate to 265TWh from 2016 to 2021, while residential and industrial gas demand is forecast to grow at an annual rate of 4.8% to 32.7bn cubic metres (3.2bcf/d) over the same period.

Collectively, this should boost domestic gas demand by 17bn cubic metres (1.6bcf/d) during the aforementioned timeframe if other factors remain constant and no changes are applied to the fuel mix at thermal power plants. Historically, power generation accounted for 52% of demand, while residential and industrial demand collectively accounted for the remaining 48% between 2005 and 2016. 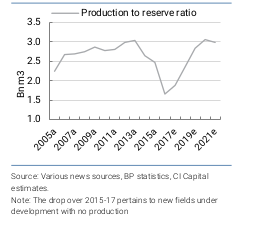 Many hope that the new gas field outputs can establish self-sufficiency and drive gas exports. However, after assessing Egypt’s natural gas market CI Capital expects that Egypt will remain a net gas importer in the foreseeable future, despite output from mega fields picking up in 2017/18, adding 53bn cubic metres (5.1bcf/d) at peak, making up around 116% of 2015 production.

Incremental supply has started to hit the market and imports are exported to decrease to reach 7.6% and 0.9% over 2018-19, respectively, of local market needs down from 13.3% in 2017. But this is still a major shift from when Eni’s mega Zohr field was announced in 2015 and there were hopes for exports. On the upside, the higher domestic supply will mean gas imports will contribute 1.6% of the trade deficit by 2020 down from 11% in the current fiscal year.

CI Capital’s report concludes that there will be no room for exports due to various reasons, such as a high increase in local demand of 5.3% from 2016 to 2021, and the fact that the heavy fuel oil (HFO) use in power plants rose due to the gas undersupply to 25% of fuel consumed for electricity generation in FY15/16 from 15.3% in FY11/12 and is likely to be substituted for improved generation efficiency and cost saving.  Suboptimal exploration means that new field output has to compensate the dwindling output from existing gas fields. As Egypt pays late dues to IOCs ($3.5bn in Dec 2016), exploration capex should be reinstated and this may mean improved supply, but not over 2017-19.

However, the report concludes that Egypt is unlikely to export in the foreseeable future or achieve self-sufficiency, as domestic demand has grown substantially since major new fields were announced. Production from existing fields depleted at a 2011-15 annual growth rates of 7.1% on the back of suboptimal exploration activity.