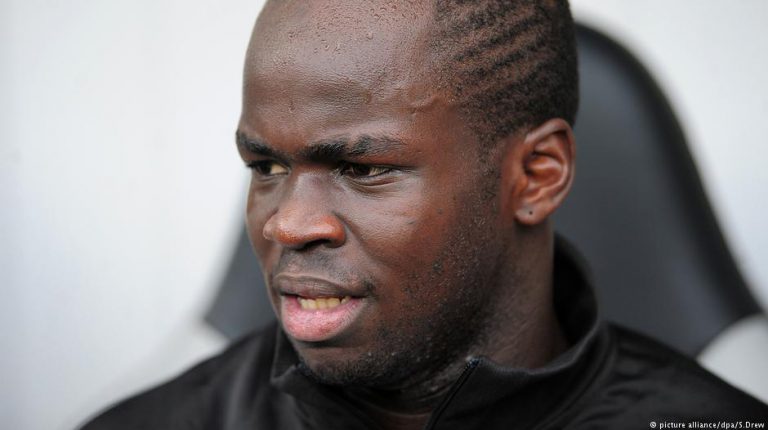 Tributes have poured in from across the world of football for former Newcastle United midfielder Cheick Tiote, who passed away suddenly after suffering a heart attack while training in China. The Ivorian was just 30.The world of football is in mourning for former Ivory Coast midfielder Cheick Tiote, who died after suffering a cardiac arrest while training with his new club Beijing Enterprises in China.

The 30-year-old ex-Newcastle United player collapsed during a session on Monday and was rushed to hospital, where he passed away. In a statement, Beijing Enterprises confirmed: “At 6pm on June 5, Tiote fell unconscious during training. He was immediately taken to hospital but died at 7pm.”

Following initial spells with Anderlecht in Belgium and FC Twente in the Netherlands, Tiote joined Premier League Newcastle in 2010, making 156 appearances for the “Magpies” and scoring one memorable goal – a stunning volley against Arsenal which drew Newcastle level at 4-4, after having trailed 0-4 at halftime.

The goal earned Tiote legendary status in England’s north-east, where he was also admired for his combative, physical style, expertly breaking up play in front of the back four. Reports even said he attracted the interest of the likes of Arsenal and Manchester United.

“We are devastated to have learnt of the tragic passing of Cheick Tiote,” said Newcastle in an official statement. “The thoughts of everyone at Newcastle are with Cheick’s family, friends, teammates and everyone with the clubs he represented.”

Tiote’s former coach at Newcastle, John Carver, remained in contact after his move to China and paid tribute to Tiote’s personality:

“I loved Cheick to bits,” he said. “I’m absolutely devastated. We spoke regularly and it was only a couple of weeks ago that we last chatted. Cheick was a warrior on the pitch but a big kid off it. I’ll never forget that big smile of his.

“Fans and opponents will recall him as a footballer who was hard as nails but those of us who knew him closely will remember him as a real softie and a lovely human being.”

Friend and former teammate Papiss Cissé took to Twitter, saying: “Goodnight brother. You will be missed. Gone too soon,” while Newcastle legend Alan Shearer, who scored 178 goals in 364 appearances for his home-town club, tweeted: “Devastating news of the death of Cheick Tiote. RIP.”

Current Newcastle coach Rafael Benitez, who last season lead the club back to the Premier League, released an emotional statement of his own, writing: “It is with great sadness that I have this afternoon learned of Cheick’s death. In all the time that I have known him, he was a true professional, dedicated and above all, a great man. Our hearts go out to his family and friends at such a sad time.”​

A popular figure off the pitch

Tiote wasn’t just a popular figure on the pitch but also in Newcastle itself – a one-club city with a proud population, known colloquially as “Geordies.” Local comedians Ant & Dec led the non-football tributes, tweeting: “Shockingly sad news. RIP Cheick Tiote. Thanks for everything. The Geordies will never forget you.”

Tiote is the latest footballer to collapse while training or playing, when seemingly at the peak of fitness.

Deaths include Cameroon’s Marc-Vivien Foe, who collapsed and died on the pitch during a Confederations Cup game with Colombia in 2003 and Livorno’s Piermario Morosini, who passed away during an Italian second-tier game in 2012.

Fabrice Muamba was resuscitated after collapsing on the pitch during Bolton Wanderers’ FA Cup match at Tottenham Hotspur in 2012. He retired from professional football.