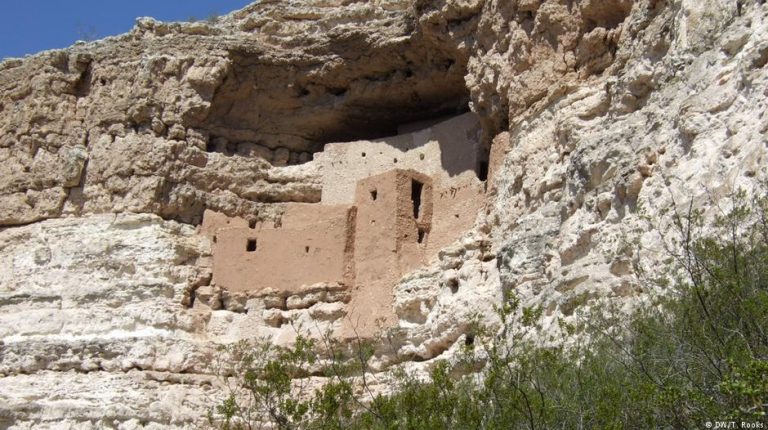 Sometimes our beautiful planet has had a helping human hand. At Montezuma Castle in Arizona the Sinagua give new meaning to living close to nature. It’s an amazing tribute to our ancestors and must be seen to be believedMontezuma Castle was built in a limestone cliff alcove near Beaver Creek in the Verde Valley in what is now central Arizona. Cliff houses are not uncommon and usually consist of one room. They are made of masonry walls and timber that enclose natural recesses in the cliff wall, turning these niches into rooms. Access is possible by a series of ladders and narrow ledges.

But Montezuma Castle is in a class of its own. It is 90 feet (27 meters) from the ground, five floors high, consists of 20 rooms and its interior covers an area of 4,000 square feet (370 square meters). The multi-family dwelling faces south and is kept warm and dry all day by the sun, which is especially important in the desert since temperatures plunge at night.

This prehistoric ruin was built by the Sinagua people. Construction likely started around 1125 AD and progressed in phases over many generations. The finished castle probably comfortably housed 30 to 50 people. These inhabitants were truly one with nature.

The Sinagua were a pre-Columbian culture that once populated large parts of central Arizona. Though surrounded by desert, they had a complex set of canals for irrigation which made agriculture possible. But despite having a sophisticated culture and suitable engineering knowledge, the Sinagua completely abandoned the Verde Valley around 1420.

No one knows for sure why they left: climate change, drought, war. But looking back they were not the only pre-Columbian culture in the southwest to move on.

After the indigenous people left it was another hundred years before Europeans first saw the castle – presumably in 1583. Over the next 20 years, groups of Spanish explores searching for mines came through the area. Following this spurt of early exploration there is no record of a European visit for the next 200 years.

In the early 1800s fur trappers and mountain men crossed the region, but it was not until after the Mexican-American War ended that explorers and settlers came in great numbers. According to the Treaty of Guadalupe Hidalgo signed in 1848, everything north of the Rio Grande River was now American – California, Arizona, Nevada and Utah, New Mexico and Texas.

What’s in a name?

However, sometimes names can be deceiving. Montezuma Castle is not a castle and has no connection to the fabled Aztec ruler. In fact, the area was abandoned decades before Montezuma was even born. And though the Aztecs had a large empire it didn’t come anywhere close to Arizona.

But early chroniclers of the area were either unaware of Aztec trivia or simply using their creative license. In the end it was an easy way to designate arcane prehistoric ruins and allusions to Montezuma appeared as early as the 18th century. Montezuma Castle is just one of a number of such attributions honoring the Aztec emperor.

The name stuck. In December 1906, President Theodore Roosevelt made Montezuma Castle a national monument – Montezuma Castle National Monument. Today, it is an important heritage landmark set in an 860 acre (350 hectares) preserve that has changed very little in the last millennium.

Do you have a picture of a beautiful landscape or something amazing in nature that you want to share with our readers? If so, you can send it to us using the upload tool on our website, or by emailing us at ecoafrica@dw.com. We look forward to hearing from you.

10 things we learned on our low-carbon road trip