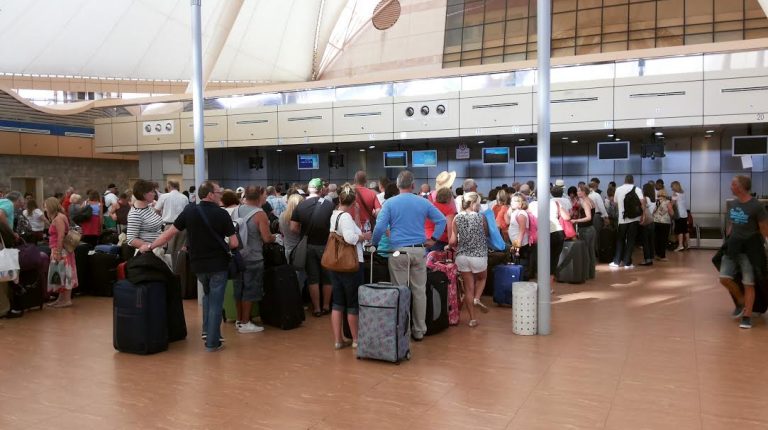 It seems the worst is over for Egypt’s tourism sector, as a recent rebound in bookings suggests that travel agencies are putting Egyptian cities again on their lists after years of ups and downs, which made most tourists escape visiting Egypt due to rising violence and political turmoil.

A recent survey conducted by Trip Advisor, an online travel website, showed that bookings to Egyptian cities have grown in the last three months by almost 65% year-on-year, an annual growth rate that hadn’t been witnessed since the 25 January Revolution in 2011, which toppled former president Hosni Mubarak and his regime.

Foreign travel agencies and tourist companies told Daily News Egypt that they are getting more persons who favour Egypt as their next destination this summer, with security procedures on board and a state of tranquility all over the country.

Tourism is a vital sector for Egypt’s ailing economy, with its total contribution to the GDP rising from 8.5% in 1988 to a high of 19.5% in 2014, according to the World Travel and Tourism Council (WTTC).

But the sector has been in a free fall since 2011, with chaos hitting Egypt’s streets and terrorist attacks resurfacing.

Over the last couple of years, Egypt has exerted more efforts to revive the sector by introducing a developed tourism infrastructure and propaganda to convince foreigners to again make Cairo on their favourable destination list.

“We are getting more demands from our clients to visit Cairo. They think that the worst could be over for this blockbuster destination. In the heydays, if you want to visit Egypt, you have to arrange it almost a year before,” Tim Flin, a senior reservation agent at Tomas Cook, told Daily News Egypt.

Egypt’s tourism sector has been on a roll in the period from 2007 to 2011, with total revenues hitting $14bn in the fiscal year (FY) 2009-2010, according to official data published on the Ministry of Tourism website.

“It is high time to come back despite challenges. We have called off some winter programmes on terrorism alarms, but despite this, our clients are asking for a few days in their programme there,” Flin added.

Earlier in May, Thomas Cook cancelled some of its holidays in Sharm El-Sheikh.

The agency has been practising so-called “rolling cancellations” to Sharm El-Sheikh over the past 18 months.

The tour operator first took holidaymakers to Egypt in 1859.

The company said in a press release last April that it was seeing strong demand across most of its markets, including a recovery in holiday bookings for Turkey and Egypt.

For another tour operator, Egypt is coming back to be a favourable destination for its clients.

“We have nearly tripled our numbers over the last year, and we are receiving more and more requests to visit Egypt,” said Robert Drumm, president of the Swedish tour operator Alexander & Roberts.

“Due to growing demand, we are adding more new things to our programme to visit Egypt. The conditions are getting perfect, albeit challenges,” Drumm told Daily News Egypt.

“Street chaos and violence are over. While terrorist events still occur, they seem to be fairly focused on discrete targets. As horrifying as they are, bookings remain on a steady pace despite these events, as terror events happen in non-Middle Eastern places elsewhere,” said Drumm.

“Terror attacks are being carried out in London. We do not have to shed more light about this point. Terror is everywhere,” he confirmed.

Another travel agency, but American this time, confirms this point of view.

Intrepid Travel, an American tour operator based in California, says that it has increased its Egypt departures by 140%, to 48, for 2017, compared with the 20 it offered in 2016, and the company reported a 70% bump in bookings for travel to its Middle East destinations overall this year over last.

Tourico Holidays, a Florida-based global travel distribution company, has also seen a surge in demand for Egypt. The company reported that reservations for destinations throughout the Middle East are up by 112% year-over-year, with Egypt alone having experienced a 300% jump in reservations compared with last year.

Hard to find a room

A busy lobby in one of Cairo’s renowned hotels could give further details about the bright picture.

After waiting in a long row in a five-star hotel over the Nile last week, it was very hard for Samantha Barry to find a room, as she wanted to change the hotel during the course of her visit to Cairo.

“I tried to change the hotel, but in vain. I almost checked three hotels and all are complete, especially here in Cairo,” Barry told Daily news Egypt.

“I have to stay in the hotel in the tour operator programme. This didn’t happen the last year when I was here. Egypt is getting crowded by foreign visitors,” she added.

The number of tourists visiting Egypt this year could come close to levels seen before its 2011 uprising, encouraged by investments in airport security and a cheaper Egyptian pound, the country’s Minister of Tourism told Reuters earlier this year.

The number of tourists coming to Egypt’s beaches and ancient sites stood at 9.3 million in 2015, compared with more than 14.7 million in 2010.

German market researcher GfK said last week that German holidaymakers’ bookings for trips to Egypt in the upcoming summer season were up 91% from last year, but were still 23% below pre-uprising levels.

Egypt has been offering incentives to airlines, such as EasyJet and Germany’s Air Berlin, and tour operators, such as TUI and Thomas Cook, to bring more tourists to the country.

The report said that the Egyptian tourism sector will perform well over the long term, and that the recent declines in terms of numbers employed and the share of the GDP are not characteristic of the sector’s performance.

“Tourism still contributes greatly to the economy, and it has considerable potential. Some areas have significant room for development, such as parts of the White Mediterranean, while even the more established sites can be better utilised through additional investing and improved marketing campaigns,” the report explained.

“Overall, the country can enhance its tourism competitiveness internationally by improving infrastructure and by being more welcoming to foreign visitors. Ultimately, Egypt can get much more out of its natural and historical assets than is currently the case. It can also get ahead of the trend by developing what it has in a sustainable and eco-friendly way, thus guaranteeing that tourism will continue to contribute to the economy over the long term,” it added.

The report also said that addressing the recent concerns about stability and security is not expected to be easy, but the country is currently making tremendous efforts to assure the world that travel there is safe, and it is committed to keeping tourists safe, investing a sizeable marketing budget to overcome the negative impressions of the country.

However, it may take time to win back some potential visitors, as many international tourists will want to see a period of stability before committing to a trip to Egypt.

“Over the long term, investors in the country are confident in its prospects. They are using this current slowdown to develop new markets, such as those for domestic and regional travellers, as well as investing in infrastructure and training for staff. When international visitor numbers begin to rise again, the operators expect that they will be well placed to take advantage of the increase in traffic, and they see this period as a time for consolidation,” it finished.

Market is in need of good security solutions: sales and customer support director at Trend Micro