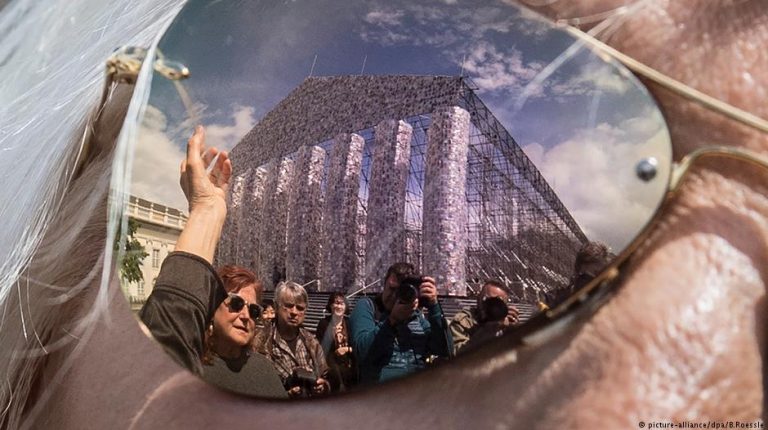 The international art show opens in Kassel, a month after its first part set in Athens debuted. Political works reflecting the world’s current tensions grab the attention. Here’s a tour of the highlights.From Hiwa K’s “Pipe Hotel,” mirroring the situation of homeless refugees in Athens’ harbor, to an installation composed of broken parts of boats used by refugees to try to cross over to Europe – political works clearly stand out this year at the Documenta 14.

This is certainly supported by the views of the organizers of international art show. “We are living in times of uncertainty. Uncertainty often leads to violence,” said curator Bonaventure Soh Bejeng Ndikung at a press conference, where he called upon artists to be “defiant.”

“We believe that we need to unlearn what we appear to know,” artistic director Adam Szymczyk added. “Learning must be the guiding principle of this Documenta.”

What does art have to say about the world’s confusion? In times of greedy neoliberalism, growing nationalism, with new wars breaking out and politicians like Trump, Erdogan and Putin elbowing into world politics, not to mention the recurring daily terror attacks worldwide, what are the questions asked by art? And what are the answers it offers?

This much remains certain: Over 160 artists are offering their interpretation of today’s world in nearly 30 exhibition spaces, spread out over the whole city of Kassel. Visitors of the exhibition need sturdy shoes.

Starting at the centrally located Fridericianum museum, which currently houses the collection of Athens’ National Museum of Contemporary Art, the international art show stretches out into different museums, squares and parks. A cinema, an underpass and halls on the university campus are also turned into exhibition spaces, along with the former post office building in Nordstadt, a problematic district of Kassel.

‘Being safe is scary’

Over the entrance of Kassel’s main museum, Turkish artist Banu Cennetoglu had the usual inscription, “Museum Fridericianum” replaced by “Being safe is scary,” a tribute to Kurdish journalist and former freedom fighter Gurbetelli Ersöz.

Along with the forbidden books featured in Marta Minujín’s life-sized reproduction of Athens’ famous temple, “Parthenon of Books,” set upon the site ofa Nazi book burning is the work “Expiration Movement” by Daniel Knorr. Knorr’s conceptual piece is based on smoke coming out of the tower of the Fridericianum, a reference to the Nazis’ ritual destruction by fire.

Not all artworks offer such direct symbolism. Some of them tell long, complicated stories.

In contrast, Australian painter Gordon Hookey also expresses more directly his anger towards colonial oppression and the exploitation of Indigenous people, using loud colors on the monumental mural of his series, “Murriland.”

There are strikingly fewer paintings and sculptures at the Documenta as performance and conceptual art gain ground, often integrating film, installations and documentary material.

Among such documentary works is a series by Palestinian photographer Ahlam Shibli. “Heimat” (Homeland) shows the lives of Germans expelled from Eastern Europe set against the situation of guest workers from the Mediterranean. They offer depictions of departures and arrivals with an uncertain outcome.

The same themes emerge from the film “And then there were none,” by Thai artist Arin Rungjang, where the protagonists of the film are sent on a historical exploration of Berlin.

US filmmaker Ben Russel has set up his documentary film installation “Good Luck” in the dark catacombs of the Fridericianum. It portrays workers in a Serbian copper mine and an African gold mine.

Documenta 14 is held from June 10 through September 17

The mayor of Kassel is expecting a record-breaking number of visitors when the exhibition officially opens on Saturday. Some 2,000 journalists were already on location to review the art show before its launch.

Five years ago, Documenta 13 welcomed 860,000 paying visitors; this year, organizers hope to break the one-million mark – with the most political art show in a long time.