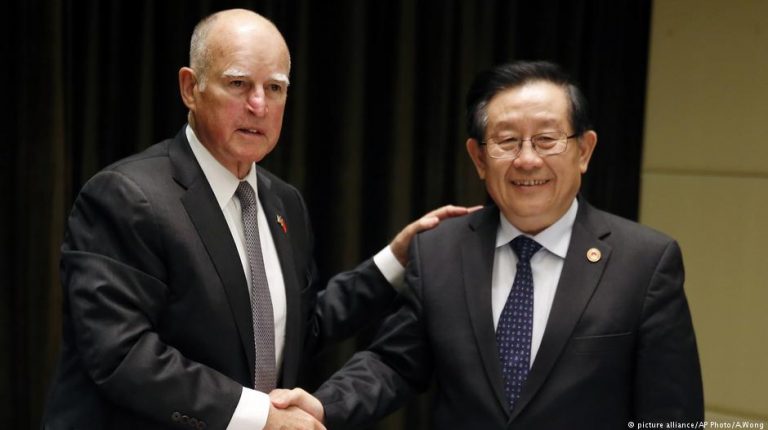 Shortly after Donald Trump dropped the Paris climate agreement, the first federal state mutinied by making its own climate deals. And otherwise? Coral bleaching, old bones and creepy crawlies – a look back at the week.Since US President Donald Trump can do what he wants, why can’t we, thought Jerry Brown, Governor of California? If he’s leaving the climate accord, we are starting our own with the Chinese – who, according to Trump, invented climate change or something like that – to save the climate, concluded the governor. California, the most populous US state is planning close cooperation with the Middle Kingdom to push renewable energies and environmentally friendly technology.

The force of climate change can be witnessed very clearly at Australia’s Great Barrier Reef. Corals here are dying. Why? The sea absorbs a large amount of heat. As the climate warms, the water warms too. Corals are animals that house colorful algae. If the surrounding water gets too warm, the corals expel their algae, turn pale and starve to death.

Hardcore genealogists may soon be able to claim that they can trace their family tree as far back as 300,000 years. That’s because an international team of scientists has called into question the commonly accepted theory of the origin of Homo sapiens. Until now researchers believed that we arose about 200,000 years ago in East Africa. But the scientists have reanalyzed fossils from the continent and believe we possibly came from Morocco.

In Germany, some energy companies have dollar signs in their eyes. Well, not exactly. They already spent the cash in the form of a nuclear fuel rod tax introduced in 2011. The country’s top court has now ruled the tax illegal, saying it is incompatible with the German constitution. The controversial tax added nearly 6.3 billion euro to the state coffers, which now may have to be returned.

If anyone knows how much you can earn as a Guinness world record holder in Thailand, it’s Kanchana Kaetkaew. She’s already appeared twice in the annually-published tome. She is especially good with scorpions. For her first record, the Scorpion Queen carried one of the creatures on her closed mouth for 3:28 minutes. She’s just received a second record for spending 33 days in a 12 square meter room with 5,000 living scorpions. She was stung 13 times.