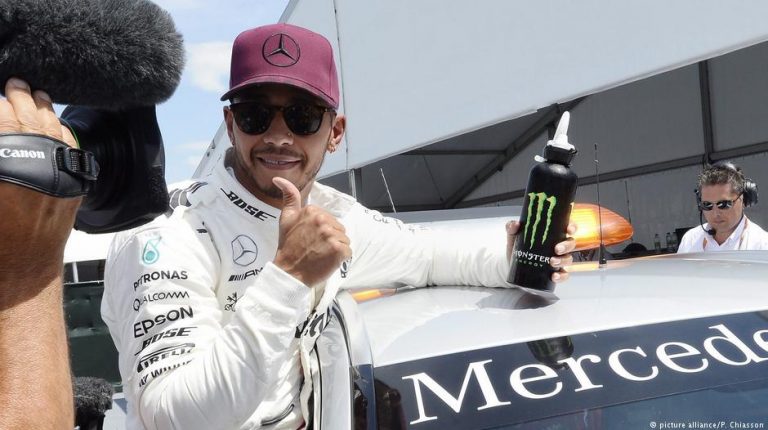 Lewis Hamilton and Sebastian Vettel set the fastest ever times recorded at the Circuit Gilles Villeneuve. But Hamilton was the faster of the two and will be ahead of the German on the grid in Sunday’s race in Montreal.Lewis Hamilton reeled off a series of record-breaking laps to claim pole position for Sunday’s Canadian Grand Prix – and was then given one of his hero Ayrton Senna’s race helmets.

The Brazilian’s family arranged the presentation to Hamilton for equalling Senna’s career total of 65 poles.

The three-time world champion steered his Mercedes to a fastest time of one minute and 11.459 seconds to outpace nearest rival and world championship leading German Sebastian Vettel of Ferrari by 0.330 seconds.

Both men clocked the fastest-ever times recorded at less than one minute and 12 seconds at the Circuit Gilles Villeneuve, the track where Hamilton’s career took off 10 years ago with his first win.

It was the Briton’s third pole this year, his sixth in Canada – equalling the record of German Michael Schumacher – and the 65th of his career.

Four-time champion Vettel did his best to grab pole, but had to settle for second ahead of Finn Valtteri Bottas in the second Mercedes and compatriot Kimi Raikkonen in the second Ferrari.

“I am so happy,” said a delighted Hamilton. “Montreal has been good to me over the years and it was a close battle with the Ferraris.

“They have been very quick. My lap? It was a sexy lap… A great lap!”

Hamilton secured his maiden Formula One victory in Montreal 10 years earlier in 2007 and will be racing for his sixth win at the circuit in Sunday’s race.