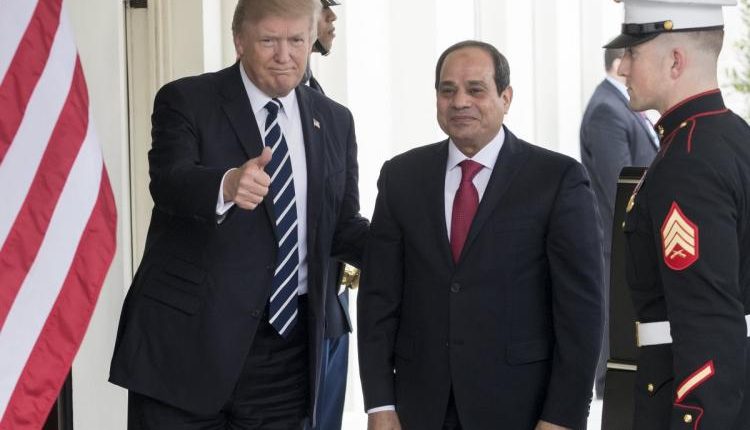 Egypt’s President Abdel Fattah Al-Sisi praised US president Donald Trump Saturday for his efforts on tackling terrorism and his role in “the formation of a united front to combat terrorism.” The call came after Trump accused the State of Qatar of funding terrorism.

Al-Sisi thanked Trump for his participation in the US-Islamic summit in Riyadh last May, centred on fighting terrorism.

Trump accused Qatar of being a “high level” sponsor of terrorism, during a joint news conference with Romanian president Klaus Iohannis on Friday.

Bahraini foreign minister Khalid bin Ahmed Al-Khalifa said Saturday that he notified the Turkish president Recep Tayyip Erdogan about the updates on the Gulf crisis and the Qatari policies that caused the crisis, Turkish media reported.

Al-Khalifa said Erdogan explained to him that the Turkish military base in Qatar is not there to target any country, but to ensure the security of the region.

On Wednesday, Turkey’s parliament passed legislation allowing Turkish troops to be deployed to the Turkish military base in Qatar.

German foreign minister Sigmar Gabriel stated Saturday that the dispute between Qatar and other Arab states could lead to war, but he still sees a chance to defuse the tension.

Gabriel told the German media that he spoke personally this week with his counterparts from Saudi Arabia, Qatar, and Turkey, and had phone calls with foreign ministers of Iran and Kuwait to emphasise his concerns. He believes that there is a good chance that progress will be made.

Qatar: no deportation of nationals from countries that cut ties

The Qatari Ministry of Interior announced this week that nationals from countries that cut diplomatic ties with Qatar are free to remain in the country; this is provided they stay in line with existing regulations, according to a statement carried by Qatari state news agency QNA on Saturday.

“There was no change in policy towards the nationals of brotherly and friendly countries that cut or reduced diplomatic relations following the malicious and hostile campaigns against Qatar,” Qatari ministry of interior added.

Saudi authorities have prevented Qatari nationals from entering the Grand Mosque in Mecca, after the diplomatic tension increased between Doha and some Arab countries, Al-Sharq newspaper reported.

According to Al-Sharq, Qatar’s National Human Rights Commission (NHRC) said Saturday that it had received complaints from Qatari citizens who made the pilgrimage to Mecca and were barred from entering the Grand Mosque.

The NHRC head, Ali bin Smaikh Al-Marri, described the incident as a flagrant violation of the right to practice religious rites as permitted by human rights conventions. He added that the commission is working to hire an international law firm to handle cases related to Qatari and Gulf Cooperation Council citizens, who sought legal help after being affected by the blockade and embargo imposed on Qatar.

Saudi Arabia, the UAE, and Bahrain announced on Sunday that it had created hotlines to help mixed families with Qatari members. They did not specify what services the hotline would provide.

The three Gulf states gave Qatari visitors and residents two weeks to leave their countries, leaving hundreds of mixed-citizenship Qatari couples with the grim prospect of being split from their families.

“Saudi Arabia, the UAE, and Bahrain are toying with the lives of thousands of Gulf residents as part of their dispute with Qatar, splitting up families and destroying peoples’ livelihoods and education,” Amnesty International said on Friday.

Ethiopia announced Saturday its support for Kuwait’s mediation efforts to end the Qatar-Gulf diplomatic rift, expressing its readiness to play a constructive role for a peaceful resolution of the crisis.

Ethiopia’s foreign ministry said in a statement it did not support any kind of negative media reports that incite instability in countries. Also, it added that it will continue working with countries to fight against the global threat of terrorism.

Kuwait has played an important role in ending the latest tension between Qatar and other Gulf countries similar to the role played in 2014. Emir of Kuwait Sabah Al-Ahmad Al-Jaber Al-Sabah has visited Doha, Riyadh, and Abu Dhabi in efforts to convince the parties to end the tension.

Niger’s foreign ministry expressed its solidarity with Egypt, Saudi Arabia, the UAE, and Bahrain, and it announced it had recalled its ambassador to Qatar following the latest developments in the Gulf.

Eritrea declined a request by Saudi Arabia and the UAE to cut diplomatic ties with Qatar, according to a statement issued by Eritrean foreign ministry.