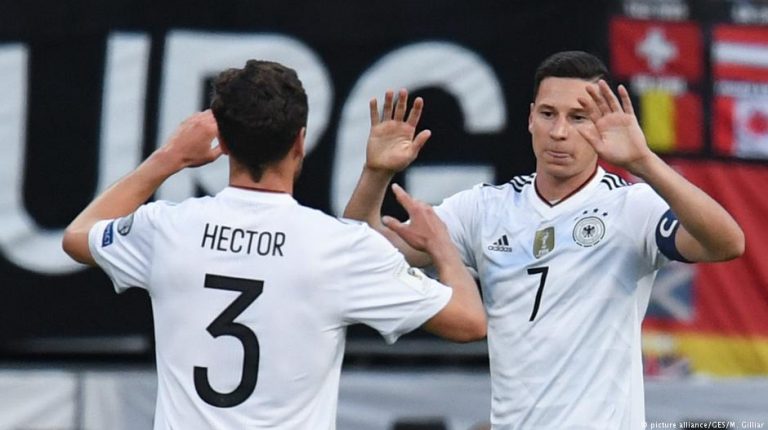 Most countries are bringing their best to Russia for this year’s Confederations Cup, but not Germany. The squad selection from coach Joachim Löw made one thing clear – he is planning for next year’s World Cup.The German national team has always been at the pinnacle of international competition. They have reached the semifinals of every international tournament they have taken part in the last 10 years, winning their fourth World Cup in Brazil in 2014.

But when the team heads to Sochi to face Australia on June 19 in the Confederations Cup, they will be entering a tournament where winning is not the number one priority. Joachim Löw called in a very inexperienced squadfor the tournament. Only six of the players were with a team a year ago for the European Championship in France, and only one – Borussia Dortmund defender Matthias Ginter – is a World Cup champion.

“I understand the people who think that, without many world champions and big names, there is no traction to develop this summer. But I say that there is enough fans that are very interested to learn the next generation of the national team,” Löw said in an interview published by German media outlet “Bild”.

“We are lining up with a perspective squad with young players who have desire and are easygoing. I believe they will enrich the Confederations Cup.”

“I’ve known since that the Confederations Cup would take place. I already had thoughts of polishing the younger players,” Löw told RTL television after his team’s 7-0 win against San Marino in World Cup qualifying.

Wagner’s emergence may be the most critical for Germany in Russia. Mario Gomez was the only striker Löw brought to France for Euro 2016, and Germany did not score in their semifinal loss against France when Gomez was unavailable due to injury. With 27 goals the last two seasons for Darmstadt and Hoffenheim, Wagner could add crucial depth on Germany’s front line if he were to prove himself at the Confederations Cup.

“Sandro Wagner is one of our best strikers in the Bundesliga. He has a very special way of playing that will hopefully do us very good,” Löw said in last week’s “Bild” interview. “The standard is always absolute world class, like Messi and Ronaldo. Our players need to measure themselves with [those types of players].”

The biggest manifestation of Löw’s “youth polishing” is his decision to give Julian Draxler the captain’s armband for the entire tournament. The German forward has been a bit of a diva reputation after forcing a move out of Wolfsburg to French club Paris Saint-Germain. But Draxler, 23, has shown the desire to take more of a leadership role with the national team.

“I will use the Confed Cup as a chance to prove my qualities as a leader,” said Draxler, who also called the captaincy “a big honor” after Germany’s 1-1 draw with Denmark in last Tuesday’ international frienldy.

Leadership is a trait very common in the German national team, one that Löw and general manager Oliver Bierhoff both hold in high regard.

“You could feel from the kickoff that he wants a role as team leader. That is an important aspect,” Bierhoff said after the Denmark game. Löw added: “He still needs to grow into this role a little bit. That’s a process which takes a long time. It’s a good experience for him.”

The DFB is already a very busy football association this June and July. It has already sent a youth team to South Korea to partake in the U20 World Cup and, along with the Confederations Cup, it will also have a squad in the eight-team U21 European Championship in Poland.

The busy schedule required a lot of squad planning for the DFB as they mixed and matched their rosters. But what remained consistent was the exclusion of many key players, especially considering DFB president Reinhard Grindel believes the tournament is unnecessary. But the exclusion of the “regulars” is something Löw believes is necessary to restore competitiveness to his squad.

“After the World Cup title in 2014, we need to now generate a new competitive situation and need to make changes. Our world champions, Champions League winners and Bayern’s many title-winning players need as a sort of motivation,” Löw told “Bild”.

“We cannot just take the 20 players who won the World Cup in Brazil to the 2018 World Cup in Russia. For our goal to win the title again, fresh blood will be good for us. In the end, if three or four players make the World Cup squad out of the Confed Cup, that is already a success.”