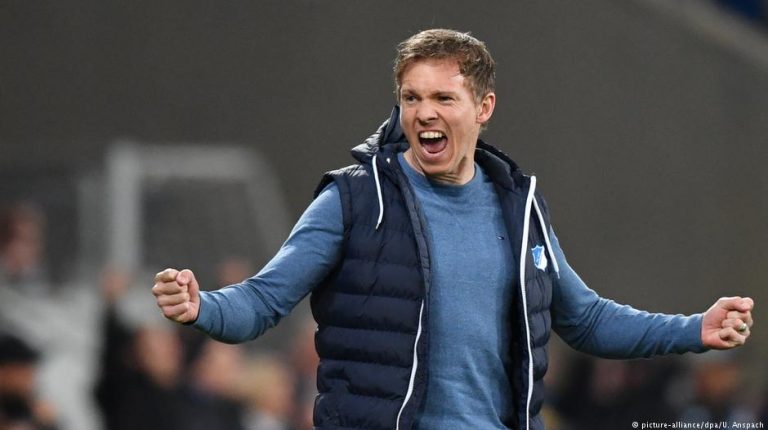 Hiring relatively young coaches with precious litte experience at the professional level seems to have become all the rage in the Bundesliga of late. This raises the question as to what is behind this new trend.Just last weekend, the Chinese first-division football club Beijing Guoan announced that they had hired Roger Schmidt as their new head coach.

“Roger Schmidt is an outstanding example for up-and-coming German coaches,” the club wrote of Schmidt, who was fired by Leverkusen back in March. Had those in charge of the Beijing club not studied his curriculum vitae? Schmidt, after all, is 50 years old and far from up and coming. Or do they simply not know anything about the Bundesliga?

To be seen as a promising talent in Germany at the moment, a coach may be no older than around 30. In just a few months, Julian Nagelsmann has become the poster child for young coaches. At 28, he saved Hoffenheim from relegation, and at 29 he led them to fourth place in the Bundesliga – and the qualifying stage of the Champions League.

Alexander Nouri, 37, is not only popular in Bremen, but has also been successful, given the modest means at his disposal. Augsburg coach Manuel Baum is 37, and Hannes Wolf, who has led Stuttgart to promotion from the second division, is 36. Last Friday, Schalke also went along with the youth trend by hiring 31-year-old Domenico Tedesco.

No room left for veteran ‘saviors’

This new trend is causing more than a few grey hairs among the old guard. Over the years, Peter Neururer has built up a reputation of being able to step in at short notice and save floundering teams from relegation. However, he has been out of work for three years now.

“I do not know Tedesco, he has done a lot of good work in Aue, but how can manager Christian Heidel really evaluate his quality?” Neururer asked the SID news agency.

“There are no empty cliches, everything has a certain depth to it,” is how Heidel described his discussions with Tedesco, which led him to hire the former coach of second-division side Erzgebirge Aue.

Frank Wormuth, the head of the football coach training department at the German football association’s (DFB) Hennes Weisweiler Academy near Cologne, is naturally pleased that his former students are so much in demand in professional football.

“To tell you about everything that has changed in the training program, I would have to deliver an hour-long lecture,” he told DW. “Of course, we are building on the work of my predecessors, Gero Bisanz and Erich Rutemöller, and we are constantly questioning what we are doing and we are open to scrutiny from outside. For example, we invited the McKinsey business consulting company to come and see what we are doing, and participants in our courses are given anonymous questionnaires so that they can provide us with their feedback.”

Getting the players on board

According to Wormuth, who has both played and coached at the professional level, the program’s academic curriculum has been scaled back, while the time spent in internships has been extended. External experts from the worlds of science and football, like the German Sport University Cologne or renowned former Bundesliga coaches, are brought in to provide background information. What is being stressed above all is the need for the young coaches to “get the players on board.”

It pleases Wormuth to hear some of his thoughts coming from the mouth of Tedesco – particularly when the newly hired Schalke coach speaks about “getting the players on board, giving them the feeling that they are part of the decision-making processes.”

“Sometimes the young coaches still carry our trademark – in the positive sense, of course,” Wormuth conceded.

It’s not as if there were no opportunities for more experienced coaches to undergo further training in their craft. In fact, a football coach in Germany must complete 20 training units within the past three years to get his coaching certificate extended. And there are no doubts in Wormuth’s mind that Neururer and his contemporaries have valid coaching qualifications.

A change in the leadership culture

So what is the behind this trend towards young coaches in the Bundesliga? Wormuth believes there are several reasons for this – beyond the ever-improving training methods. Most of the clubs employ mostly full-time coaches in their youth academies, meaning that they work under the constant observation of the club’s managers and executives. If they see that a certain youth coach has good social skills, is articulate and above all technically competent, then he becomes an obvious candidate should a coaching vacancy arise with the club’s Bundesliga team.

“There are so many good coaches out there,” Wormuth said. “You just have the courage to hire them.”

And the hiring of more young coaches is leading to a change in leadership culture in the Bundesliga.

“The people in charge are now making decisions base more on qualifications than on someone’s name,” he said.

However, there is no reason for coaches of the over-40 generation to despair. The coaches of Germany’s top two clubs, Carlo Ancelotti (Bayern Munich) and Peter Bosz (Borussia Dortmund) are 58 and 53-years-old, respectively, and neither one has ever attended the Hennes Weisweiler Academy. So there is still hope for grey-haired coaches after all.